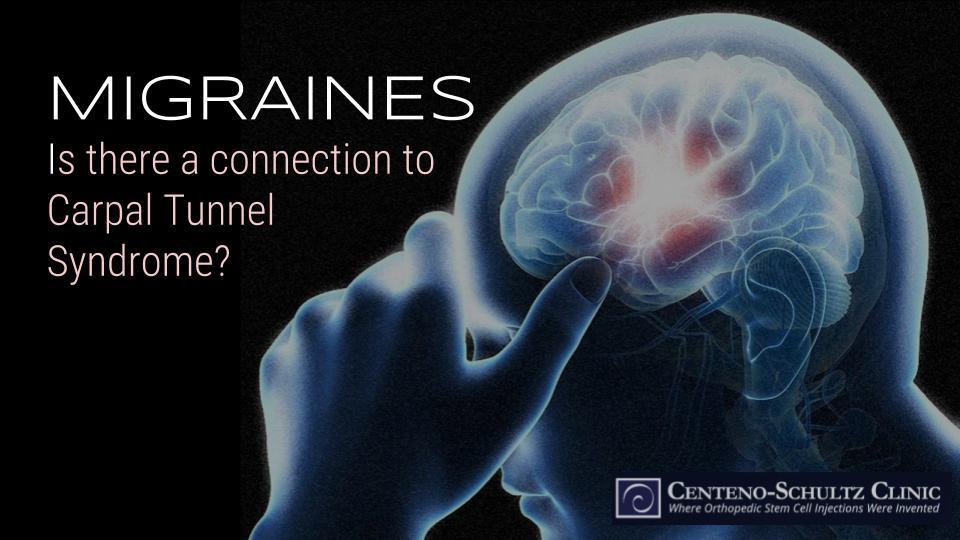 The median nerve branches off a nerve that exits the spinal column at the neck. It runs the length of the arm through a narrow passageway at the underside of the wrist and into most of the fingers (all but the pinkie). Carpal tunnel syndrome (CTS) occurs when the median nerve becomes compressed, or pinched, due to swelling of the carpal tunnel, or the tendons that make up the passageway at the wrist. This actual physical compression can be a result of an external force or injury or some condition within the body itself that affects nerve function. CTS can cause pain, numbness, and tingling not only in the wrist but also in the thumb and first three fingers the median nerve supplies.

Are Migraines Also a Compression Issue?

Migraines occur as a result of a neurological disease that is believed to involve both muscles and nerves. The cervical spine, which is the part of the spine in the neck, houses a bundle of important nerves that extend up through the brainstem and supply many sections of the brain. Migraines are thought to be a result of inappropriate communications between these important nerves and the outer covering of the brain and its blood vessels. A compression neuropathy, or a compressed nerve, in the neck, in our experience, could be the cause of the inappropriate communication.

Now, one study suggests these compressed nerves in the neck could provide a link between carpal tunnel syndrome and migraines. Let’s review.

Study Finds Many with CTS Also Suffer from Migraines

What exactly does this suggest? Potentially, irritated nerves in the neck may be the common relation connecting both CTS and migraines and may explain why both conditions may exist together.

When conservative measures fail to relieve CTS, surgery is often performed to release the compressed median nerve. This is accomplished by severing the transverse carpal ligament at the wrist. Surgery results in lengthy recovery times and, in many cases, a hand that never feels quite normal as lingering wrist instability and hand weakness is common. Therefore, our approach to carpal tunnel syndrome is nerve hydrodissection using platelet lysate around the nerve to break up scar tissue, reduce inflammation, and improve blood flow. We also take this a step further by evaluating why the CTS occurred in the first place (e.g., an irritated nerve in the cervical spine) and addressing that issue as well.

Nerve blocks in the upper cervical spine and facet trigger point injections, according to research, have been helpful in treating migraines, though these provide only temporary relief. Targeted Boxtox injections, have also been shown to be helpful, but Botox when used long term has been found in many studies to cause muscle damage, perhaps even at the genetic level. The treatment goal, however, should be to actually address the problem causing the migraines, not to just block the pain. This might be, for example, injecting the patient’s own superconcentrated platelets into the neck joins, tightening down loose neck ligaments with injections of growth factors, and using the same mix to treat irritated neck nerves.

As a clinic that evaluates both carpal tunnel syndrome patients and migraine patients and the root cause of these issues, we know very well that irritated nerves in the neck can cause headaches as well as CTS, so a study suggesting migraines and CTS may be related is no surprise to us. The key, therefore, is treating not just the presenting problem, the CTS and the migraines, but also the cause, the irritated nerves in the neck.

Learn how Interventional Orthopedics can help you avoid life-altering hand or wrist surgery by reading the cornerstone book, Orthopedics 2.0