We spend a lot of time looking at MRIs both before and after stem cell treatments. We’ve seen some fascinating improvements that exceed expectations, some MRIs that really didn’t change much, and everything in between. Today, we’re going to review a truly dramatic improvement seen on the MRI of a patient who had a cervical facet joint with severe degeneration. 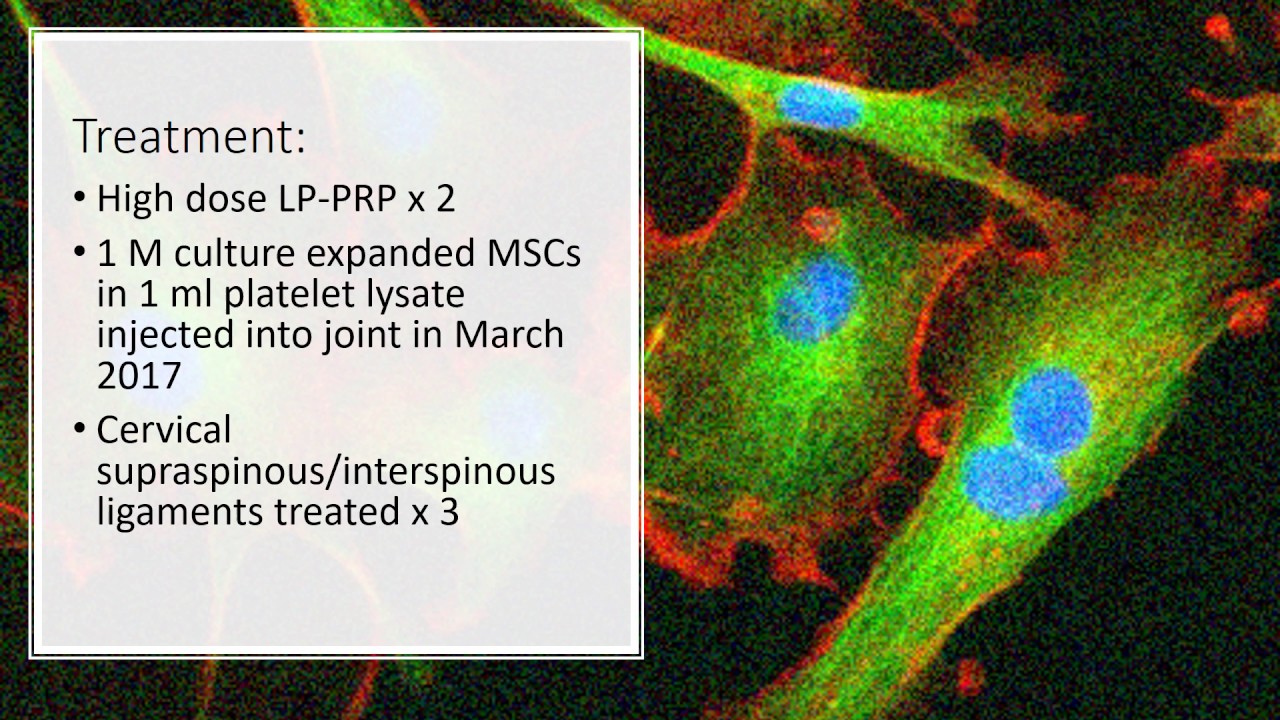 Joints can become unstable, and when instability isn’t noticed and addressed, it can lead to more joint problems. Such is the case with the patient with a cervical joint with severe degeneration presented in Dr. Centeno’s video above.

A car accident led to a subtle instability at her C2–C3 level, which is the part of the spine located in the neck. The instability was not only left untreated but, in fact, not identified at all. The response to her symptom, the pain, was to inject multiple high-dose corticosteroids.

By the time the patient made her way to Dr. Centeno, she had severe cervical joint degeneration (i.e., degenerative joint disease, or DJD) at the C2–C3 left facet joint with hypertrophy, and this had likely been caused by the steroids used to treat the pain, which was caused by her unidentified cervical instability. But it didn’t stop here. All of this then led to severe foraminal stenosis, which is a narrowing of the space that the spinal nerves travel through. From here, this enlarged facet joint put pressure on the spinal cord covering, called the dura.

So if high-dose steroids make matters worse, why do patients feel so good after a steroid shot in the joint? High-dose steroids are powerful drugs, and, yes, they may temporarily reduce swelling and pain for a few weeks or months; however, the pain and inflammation returns once the “magic” wears off, sending patients rushing back for another steroid fix. Why is this a problem? Where do we start…

First, with each repeated steroid injection, pain relief has been shown to diminish. Second, high-dose steroids have been linked to cartilage loss, with one study finding progressive loss of cartilage as well as no better arthritis pain relief than a placebo provides. Third, steroids’ effects on bone are highly concerning as studies have found links between steroids and bone loss as well as fractures. This is just a drop in the bucket; the side effects of steroids are extensive, and you can read about many more at this link.

Surgery, in most cases, is also a bad idea. For severe DJD, a cervical fusion would have likely been the final recommendation. With a cervical fusion, hardware, such as plates and screws, is installed to bolt together the vertebrae. The goal is to permanently immobilize them by forcing the two (or more) bones to fuse.  This often disrupts the natural curves of the entire spinal column. Luckily, Dr. Centeno’s patient didn’t get to that point.

Treating a Patient’s C2–C3 Without Steroids or Surgery

We initially performed a high-dose platelet-rich plasma injection, and this did provide good relief of the patient’s symptoms. Unfortunately, however, this wouldn’t last because the patient’s facet joint arthritis was so severe due to cervical joint degeneration. It became apparent, in this case, that our culture-expanded stem cell treatments at our licensed site in Grand Cayman were going to be the best solution for this patient as here, Dr. Centeno could inject about a thousand times more stem cells than what could ever be injected into the joint in a US-based treatment. He also treated the patient’s cervical supraspinous and interspinous ligaments.

Be sure to watch the video above as it shows MRIs of the drastic improvement in her left C2–3 facet joint. Notice on the before image below that the facet joint (yellow arrow) is darker and bigger than that on the opposite side. This darkness on the MRI tells us the bone is stressed and dying. Hypertrophy is the medical term for the increased size. This enlarged joint (blue arrow) is putting pressure on the dura. You can also see a that the foramen has narrowed (red arrow).

Watch the video to see her after image (five months post treatment). You will see a normal-appearing bone. In addition, her hypertrophy is almost completely gone. Improvements can also be seen in the C2–C3 foraminal stenosis, and the resulting pressure on the dura, has also improved. While a small bit of fusion was still likely in the joint, this is understandable in this case as this was an end-stage degenerated joint. In addition, the patient reported a 60% improvement in her pain!

This case, in particular, shows how powerful our advanced stem cell treatments can be. No surgery, no hardware, and no tissue destruction in the process. Just a small needle precisely positioned using imaging guidance and injecting the right orthobiologics in the right spot!

Culture-expanded MSCs are not FDA approved for use in the U.S. but are subject to an existing phase-2 FDA clinical trial. This patient was treated in Grand Cayman, which allows culture-expanded MSCs as the practice of medicine.Learn more about Craniocervical Instability.