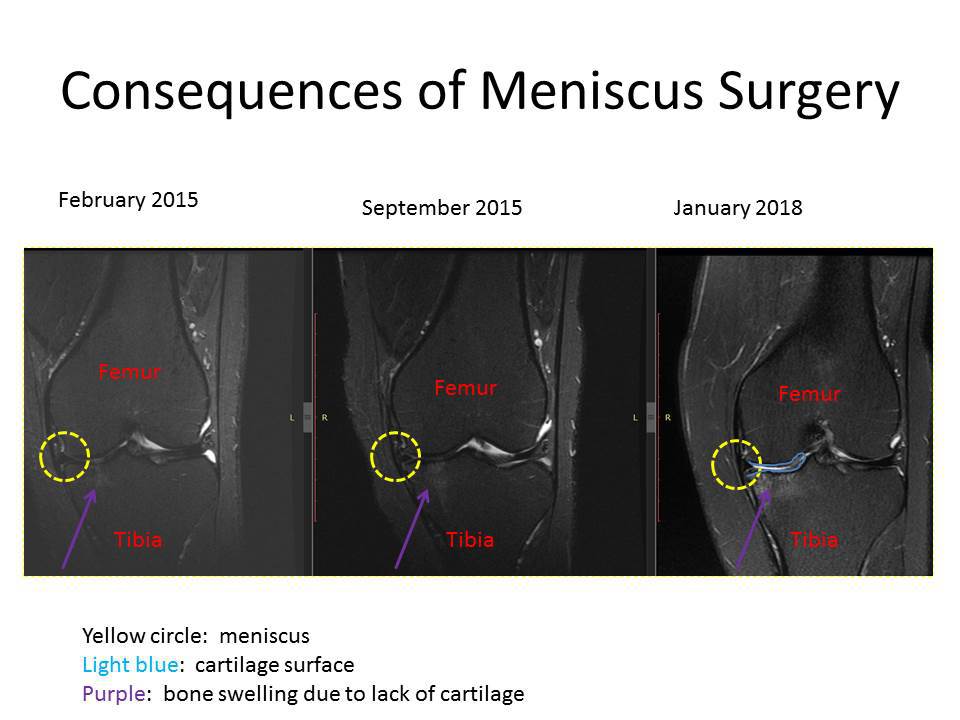 At the Centeno-Schultz Clinic, we are committed to providing image-guided injections of PRP and stem cells for common orthopedic conditions so that patients can avoid surgery. Orthopedic surgery is associated with a number of complications, which include, but are not limited to, infection, escalation in pain, deep vein thrombus and failure. A patient I saw in clinic this week underscores another problem: progression of knee arthritis and knee instability.

Knee Arthritis and Instability After Meniscus Surgery: A Patient Case

LT is a 45-year-old female who presented with a three-and-a-half-year history of knee pain that was constant, progressive, and localized on the medial aspect. In February of 2015, LT had undergone knee arthroscopy with trimming of her medial meniscus. After the surgery her pain was worse and was unresponsive to PT, massage, and chiropractic care. In September of 2015, at the advice of her orthopedic surgeon, LT underwent another knee arthroscopy with only transient improvement.

The first image, on the left, is from February 2015 and is most notable for meniscus injury, outlined by the yellow circle. Please note the light-gray line that covers the surfaces of both the femur and tibia; this is cartilage.

The middle image was taken in September of 2015 and is significant for loss of cartilage along with swelling in the tibia, which is identified by the purple arrow.

The image on the far right, taken in January of 2018, is significant for progressive loss of cartilage, loss of volume in the meniscus, and progressive swelling in the tibia bone.

Orthopedic surgery is associated with significant complications, which include progression of knee osteoarthritis as demonstrated by the case above.

Orthopedic injuries oftentimes can be treated successfully with PRP and stem cell treatments, which are available at the Centeno-Schultz Clinic, including the nonsurgical option for meniscus tears. The next time your surgeon recommends arthroscopy, please consider securing a second opinion from the clinic where stem cell orthopedics was invented.