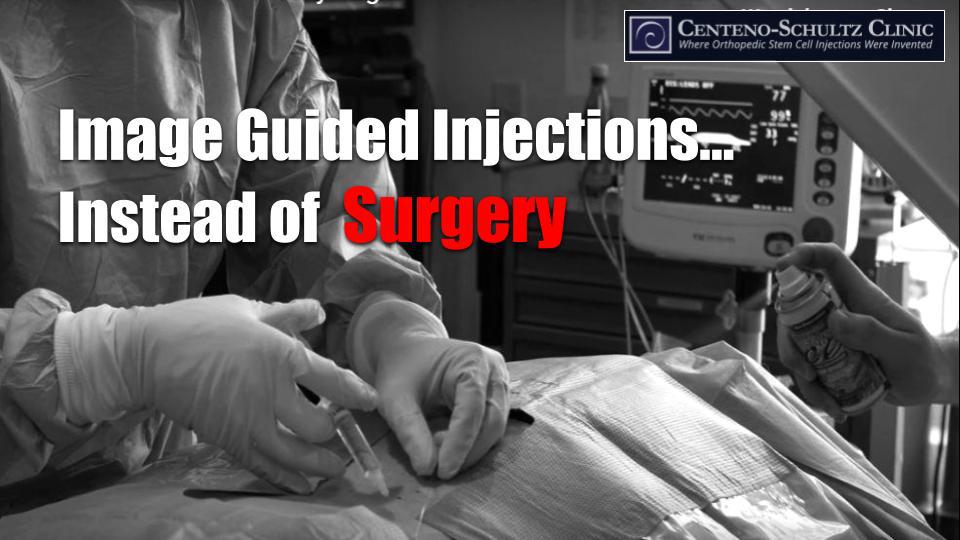 Instead of amputating joints and fusing bones, for example, interventional orthopedics treats the same conditions using advanced image-guided orthobiologic injections. Orthobiologics are the patients’ own stem cells, platelets, or growth factors that can facilitate healing of structures of the musculoskeletal system, including cartilage, ligaments, tendons, muscles, and bones.

IO has already grown so fast, and will continue to do so, that the Interventional Orthopedics Foundation was created to provide education, grow the field, and steer IO into the future of orthopedic medicine.

Surgical orthopedics, as its name implies, primarily treats musculoskeletal conditions by performing invasive open or arthroscopic surgeries. Orthopedic surgeries are some of the most common and costly performed in the U.S. They are so common, in fact, you’ve probably heard of most of these: ACL reconstruction, knee and hip replacement, meniscectomy or meniscus repair, rotator cuff repair, spinal fusion, and so on.

It’s important to not3 that there will always be extreme circumstances that will require an orthopedic surgery. However, today, most musculoskeletal conditions can be treated nonsurgically for most patients. For example, for all of the surgeries we listed above, there is an interventional orthopedics solution for all but the most extreme cases. However, in the field of surgical orthopedics, surgery truly is the last-resort option available, so you won’t find those nonsurgical IO solutions via your orthopedic surgeon.

Six Tenets That Distinguish Between Interventional and Surgical Orthopedics

There are six key tenets that help distinguish between interventional and surgical orthopedics. We’ll define each briefly below. For more detail, watch the video above.

Surgical Orthopedics: Surgeons believe that a structural problem seen on an MRI equals pain and poor function. The solution? Fix it with surgery.

Interventional Orthopedics: IO does not agree with this idea. Why? Because studies show that what’s found on MRIs and X-rays often doesn’t correlate with pain and poor function.

If It’s Bad, It Must Be Cut Out

Surgical Orthopedics: Surgeons, by definition, love to cut the problem out. If a knee, for example, is bad, it must be cut out. Remember, surgery is the last resort in surgical orthopedics.

Interventional Orthopedics: In IO, we believe it’s best, for biomechanics, to preserve a structure and that in most cases, cutting problems out of a joint is unnecessary and typically only makes things worse. There is too much research that concludes that cutting stuff out of the body just doesn’t work.

Surgery Makes It All Better

Surgical Orthopedics: Surgeons believe invasive surgeries, such as joint replacements, is the ultimate fix for realigning and healing the problem. However, supporting research for this belief is sadly lacking.

Interventional Orthopedics: IO believes quite the opposite; surgery is often just further damage to accomplish a goal and can make matters worse. Surgery cannot affect the submillimeter precision required to properly realign the musculoskeletal system.

If Nothing Else Works, Fuse It

Surgical Orthopedics: Whether it’s the spine, the wrist or hand, or the toes, for example, orthopedic surgeons love installing fusion hardware to bolt bones together and permanently immobilize them.

Interventional Orthopedics: In IO, we recognize the research that shows that back fusions are damaging procedures riddled with side effects and poor outcomes.

Surgical Orthopedics: Surgeons believe stability is a binary concept; it’s either severely unstable and in need of surgery, or it’s stable.

Interventional Orthopedics: IO believes there is a spectrum to consider with instability. Ignoring loose ligaments now, due to a twisted ankle or some other seemingly can only create problems later. Fixing injured ligaments now may negate the need for surgery later.

The Body Is Merely Individual Parts

Surgical Orthopedics: This is called subspecialization; one surgeon does knees, another does the back, and so on. The body just a collection of separate parts and systems, and each is examined and treated individually.

Interventional Orthopedics: IO considers the body one interconnected unit. There’s no back or knee or ankle; there’s an entire collaborative working chain. An interventional orthopedic physician is trained to treat the whole body, not just its individual parts.