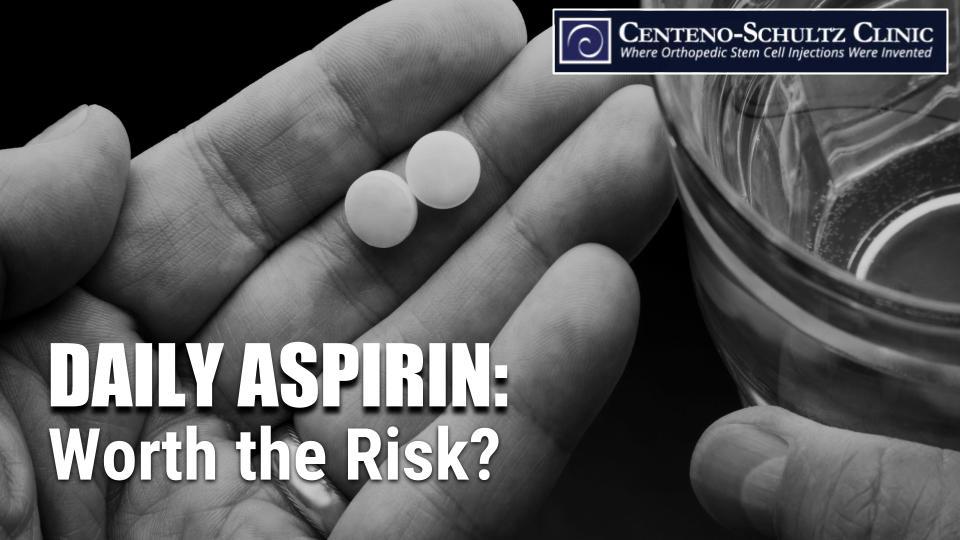 It seems like almost every patient we see in their 40s or older has been told that a baby aspirin a day will keep heart attacks at bay. Whether they’ve heard it from a doctor, a family member or friend, or, probably even more likely in today’s digital age, off the Internet, many are under the impression that aspirin should be taken alongside their daily vitamin once they reach a certain age. But why aspirin exactly? And the even bigger questions, what are the risks of popping an aspirin a day, and are they worth it? Let’s dig in and explore.

Why Aspirin Is Often Recommended as a Heart Attack Preventative

We hear a lot about nonsteroidal anti-inflammatory medications (NSAIDs) these days, and, indeed, they make the rounds on this blog occasionally. Acetylsalicylic acid, also known as aspirin, is the original NSAID used to treat fevers. But where other NSAIDs, such as ibuprofen and naproxen, are aimed at inflammation and pain relief, aspirin also adds an additional element: an anti-clotting agent, what you likely know as its ability to “thin the blood.” This is why low daily doses (i.e., baby aspirin) are often recommended as a preventative for those who might be at risk for cardiovascular disease or blood clots, such as a thrombus (a clot caused by plaque buildup on vessel walls) or an embolism (a clot that occurs when a piece of plaque breaks off the vessel wall, travels through the bloodstream, and becomes lodged in the vessel) that can cause a heart attack.

Aspirin was the primary commercially available NSAID for treating pain and inflammation from the 1890s through the 1970s when ibuprofen entered the US market as a “safer alternative” to aspirin (we now know, of course, that all NSAIDs are very dangerous drugs). Acetaminophen had entered the commercial market in the 1950s as a pain killer/fever reducer, but it was not an NSAID, meaning it had no anti-inflammatory effects (we also now know acetaminophen is associated with a long list of bad side effects). Regardless, only aspirin has the anti-clotting effects, so acetaminophen and ibuprofen would not be a substitute for this purpose even if they truly were “safer” drugs.

So what about the risks? Is taking an aspirin a day really such a great idea? A recent study not only questions the effectiveness of aspirin for the heart but broadens the concerns with hemorrhaging, or bleeding, known to be a dangerous side effect of aspirin due to its anti-clotting, blood-thinning properties. Let’s review.

Related: Is Exercise Better than NSAIDs for Knee Arthritis

So based on the findings from this study, it appears that an aspirin a day has a minor chance of protecting you from, for example, a heart attack or a stroke caused by a blood clot; however, it may have a much bigger chance of causing a cerebral hemorrhage or some other major and deadly bleeding issue.

We aren’t in any way suggesting anyone ignore their doctor’s advice and stop taking aspirin, especially if you do have a medical condition that puts you at risk for clotting issues. However, just because you’re over 40 doesn’t mean it’s time to add baby aspirin to your daily vitamin regimen. Aspirin isn’t a vitamin or a preventative supplement as it seems to be so casually used these days; it’s a drug that carries some potentially dangerous and deadly side effects. An aspirin a day may or may not outweigh the risks, but that’s a determination only your doctor can make.