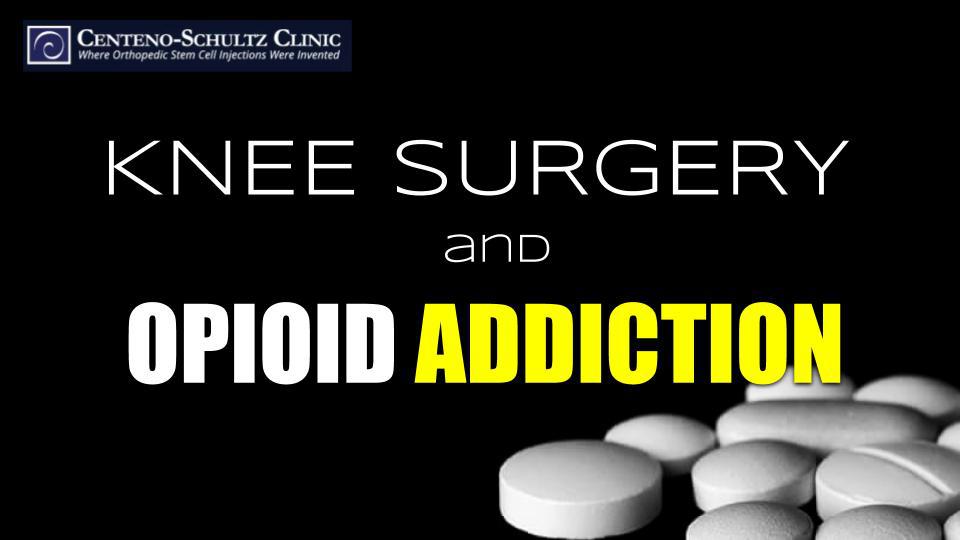 It’s a rare day that some type of news story doesn’t cross our path reporting on America’s problem with opioid narcotics. Even if you’ve never taken opioids yourself, you’re probably pretty familiar with what they are. If, however, you’ve ever suffered from any type of chronic pain, such as chronic knee pain for example, it’s possible you’ve had a discussion with your doctor about these powerful narcotic painkillers. If that chronic knee pain has continued, as opioids aren’t always effective for pain, it’s possible you’ve had the surgery talk with your physician as well, and perhaps you’re even considering knee surgery in the hopes of getting off the opioids that you know are so dangerous and even deadly.

If you’ve read Dr. Centeno’s Regenexx ProActive book, you also know that agreeing to knee surgery for knee pain (or surgery for any other type of joint pain) is like writing your own ticket for a less and less active lifestyle. Now it also seems that those who opt for surgery actually increase their chances of opioid addiction.

Opioid Addiction Is an Epidemic

The Centers for Disease Control and Prevention (CDC) reports on its website that between 1999 and 2017, there have been nearly 400,000 deaths due to opioid narcotics (the statistics include prescription and illegal use of the drug). Considering the CDC reported opioid overdose deaths from 1999 through 2014 at 165,000, in three years, the number of opioid deaths has more than doubled! In 2017 alone (the most recent year available), nearly 48,000 deaths occurred due to opioid overdose. Even taking the number of deaths due to illegal opioid use, such as heroin and fentanyl, out of the mix, prescription-opioid deaths, after a brief decline between 2011 and 2013 is, yet again, on an upward trend.

So what exactly are these opioid drugs? You may be taking one and not even know it as the list is quite long and includes hydrocodone, oxycodone, OxyContin, and tramadol as well as some combo drugs (meaning opioids blended with some other drug, such as acetaminophen), which include Vicodin, Lortab, and Percocet. This list isn’t close to being exhaustive, so be sure to research any medication your doctor recommends or that you may currently be on to determine if is indeed an opioid.

If you have had knee surgery, and your doctor has put you on something for pain, find out if it’s an opioid as one study suggests knee surgery and opioids may be a very bad combination…

Knee Surgery and Postoperative Opioid Use a Bad Mix

A study analyzed data on over 18 million patients who’d undergone different types of surgeries (11 types represented), including knee replacement, caesarean section, hip replacement, cholecystectomy, and many others. Seven of the surgeries were associated with an increased risk of chronic opioid use; however, patients who had knee surgery topped the list. Compared to a control group (a group that did not have knee surgery), the knee replacement patients had an over five times greater risk for opioid addiction!

Why so Much Opioid Use Following Knee Replacement Surgery?

Knee replacement is one of the most common knee surgeries. The problem is that we’ve seen a great deal of high-level research showing many problems following this knee surgery, including ongoing chronic pain.

So patients are signing up for surgery that they believe is the solution for their chronic knee pain, yet many are finding this not to be the case after surgery. In addition, unfortunately, it seems that those who opt for knee surgery aren’t only not getting off the narcotics as they hoped, but even if they weren’t on narcotics to begin with their chances of an opioid addiction after surgery are dramatically increased.