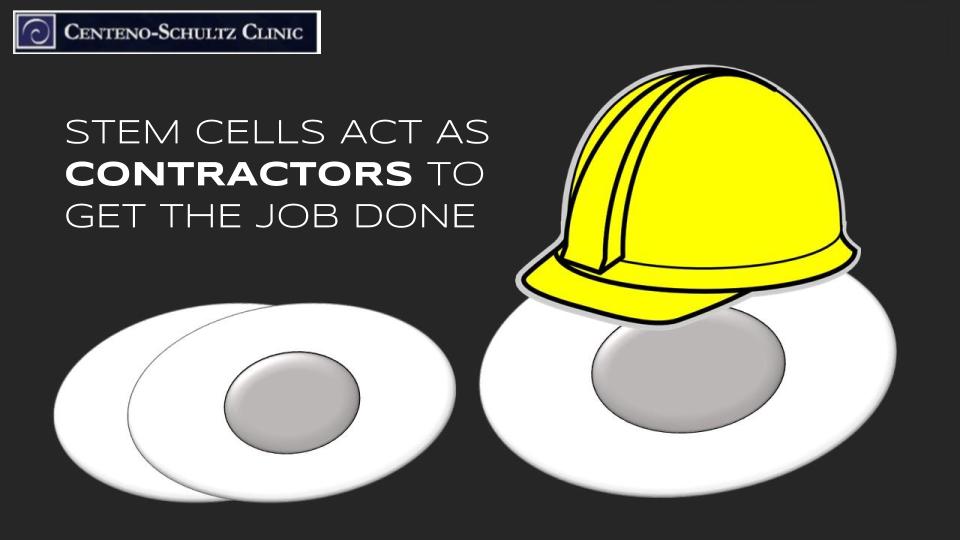 In part 3 of our “Let’s Talk Stem Cells” series, we’re going to talk about how stem cells delegate repair tasks to other cells to help with healing. Based on older research, it was initially believed that stem cells accomplished this only through differentiation (i.e., transforming into and then replacing a damaged cell). However, a relatively newly discovered process called paracrine signaling may explain how stem cells become general contractors, of sorts, in order to repair tissues. How does this process work exactly?  Let’s review.

Stem Cells Determine the Work to Be Done

Your mesenchymal stem cells first receive chemical signals from an area of injury telling them that the tissue has been damaged. Upon determining the damage that’s been done, stem cells then decide what must be done to repair that tissue. Acting as “general contractors,” these stem cells then call in the subcontractor cells.

Stem Cells Signal the Right Cells for the Job

Taking this a step further, it’s about more than just calling in cells to help repair; it’s about calling in the right cells for the job. A contractor wouldn’t call in a plumber if he needed a roof replaced. Our stem cells signal the specific “subcontractor” cells needed through a chemical release of cytokines. Cytokines are basically substances secreted by cells that can affect the behavior of other cells. For example, if the stem cell needs macrophages to come in and clean up debris, it sends a signal that, in essence, says, “I need a macrophage.” If it needs a white blood cell to come in and fight off an infection, it would signal something that equates to “Send in some WBCs.”

The subcontractor cells repair the specific problem and then retreat from the scene once they’ve completed the job. The stem cells, too, are off duty at that point, until another injury signals them to a new location. Watch some animated visuals of how stem cells delegate repair tasks to other cells in Dr. Centeno’s brief video below:

From determining the work that needs to be done to calling in just the right cells to do it and then giving them a big shot of espresso so they’ll work extra hard, stem cells coordinate every stage of tissue repair. Because among the many incredible functions they execute, stem cells delegate repair tasks to other cells. Our stem cells are fantastic and highly efficient managers of this paracrine signaling process. Check back in Friday for “Let’s Talk Stem Cells Part 4.”