Shoe Soles Wearing Faster on the Outer Edges? It Could Be Irritated Back Nerves

How we walk varies for each of us, and some of us tend to wear out our shoes much faster than others. Pull out the pair of shoes you wear most often, turn them over, and take a good look at the soles. Are the worn areas fairly balanced? Or are they worn more on the inner or outer side of the foot? Could the worn parts of our shoe soles be trying to tell us something, warning us of a bigger issue than just…well, worn shoes? Yes, and that’s particularly the case if your shoe soles are wearing faster on the outside of the foot; this is evidence of supination.

What Is Supination and What Causes It?

It’s important to note that even with neutral contact with the ground, the foot is naturally designed to roll slightly with contact occurring on both the inner and outer sides of the foot. It’s when this roll is overly pronounced on one side or the other that we see signs of a problem.

So what kind of problem might supination cause? The foot is the first point of contact to absorb the forces as it strikes the ground, so, understandably, arthritis in the foot might be a concern. In addition, as the forces move unnaturally up the leg, we could see arthritis in other structures, such as the ankles or knees. This can also work in reverse, meaning a problem as far up as the lumbar spine, such as irritated back nerves, can work its way down the leg and into the feet, causing supination and other problems along the way. We actually see this issue a lot in the clinic. Let’s dig deeper into how irritated back nerves may cause supination, evidenced by how your shoes are wearing.

The Connection Between Irritated Back Nerves and Supination

First, there are many conditions that can cause supination, so we don’t mean to imply that it is definitely your back nerves. Congenital conditions, such as scoliosis, can cause supination as can abnormally formed angles of the knee, ankle, or hip joint (e.g., a hip that developed too far back). Another issue that you really have no control over is how your foot was built. Some of us have flatter feet while others might have very high arches, and those high arches can also cause supination.

More commonly, however, we find that supination and other foot problems are actually due to irritated nerves in the lower spine. This is because the nerves that branch off of the lower spine supply your lower-limb muscles. These leg muscles help stabilize and control the foot as it strikes the ground. When an irritated nerve in the low back isn’t properly supplying the leg muscle, the muscle can’t properly perform its job and balance the foot.

Don’t assume that since you don’t have back pain, you must not have irritated spinal nerves. While pain may accompany irritated back nerves, it’s also highly possible there will be no pain, or that the pain is presenting further down the kinetic nerve chain, such as in the hip or knee. Learn more by watching Dr. Centeno’s brief video below: 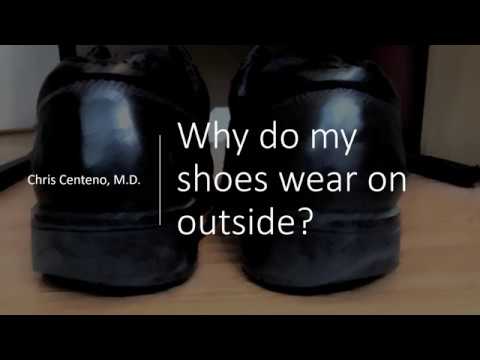 If your shoe soles are wearing out faster on the outer side of the foot (assuming there is no congenital condition causing the supination), this could be a red flag, signaling that you have irritated nerves in your lower spine. Treating it sooner rather than later is imperative if you want to stop the problem before further damage occurs.

If it’s not a nerve issue, conservative measures, such as orthotics, that can ease the pressure on the feet and other leg joints may help your supination. If it is a low-back nerve issue, however, which can be confirmed by your interventional orthopedics physician, orthobiologics, such as your own platelet growth factors, precisely injected under X-ray guidance around the irritated nerves, may be able to address both your back and, therefore, your supination problem.

So pay close attention to your shoes. They really might be trying to tell you something.

Receive an Info Packet by email and learn how our procedures can treat your condition!