Why Is My Hip Arthritis Getting Bad So Fast?

A common symptom in patients who present to us with hip arthritis isn’t just pain, but pain that progresses very quickly. Patients often ask, Why is my hip arthritis getting bad so fast? While the breakdown of cartilage in the hip and decreased range of motion are common factors it shares with arthritis in other joints, an issue that commonly occurs in hip arthritis is deterioration of the bone. This can result in bone marrow lesions and eventually voids in the bone called bone cysts left by areas of bone that have died.

Last week, we briefly mentioned bone cysts as one of the key features of hip arthritis that separate it from knee arthritis, as though bone cysts can occur in the knee, they aren’t common in the knee. Today, we’re going to expand on this and explain the unique bone issues that occur in hip arthritis as today’s entry in our arthritis series for National Arthritis Month.

What Is a Bone Marrow Lesion?

It was originally believed that the degree of cartilage degeneration (arthritis) was associated with pain. So the more pain you were in, the greater the degree of arthritis, but we now know the cartilage loss seen on MRI does not equate to pain. However, based on many research studies and our own experience, it is clear that there is one MRI finding that does directly relate to pain—the presence of BMLs.

A bone marrow lesion (BML) is a swollen area in the bone. You can imagine it as a very angry area of bone. What might cause it to get so angry? Excess forces on the bone from instability or bad cartilage can cause microscopic (very small) fractures in that specific area of the bone. Since BMLs can form in the knee, the ankle, or other bones, what makes them so much more common in the hip? It’s thought that the specific shape of the ball-and-socket hip joint puts more concentrated pressure on one area compared to the more flattened hinge joint of the knee, and the hip joint contains fewer native stem cells resulting in less cartilage repair and less new cartilage being formed. These hip BMLs are closely linked to worsening pain, and in the hip when these BMLs are left unaddressed, they tend to form bone cysts, which are areas of bone that die off, leaving voids in the bone.

What if BMLs in your hip have become a chronic issue?  This is a bad sign that signifies that the bone is no longer able to compensate for the deterioration of the joint. While in another joint, that deterioration can be a very slow process lasting years before severe arthritis sets in, in the hip, escalation is much quicker, and hip arthritis can go from mild to severe in a matter of months to two years.

Dr. Centeno’s video below explains more about this process. 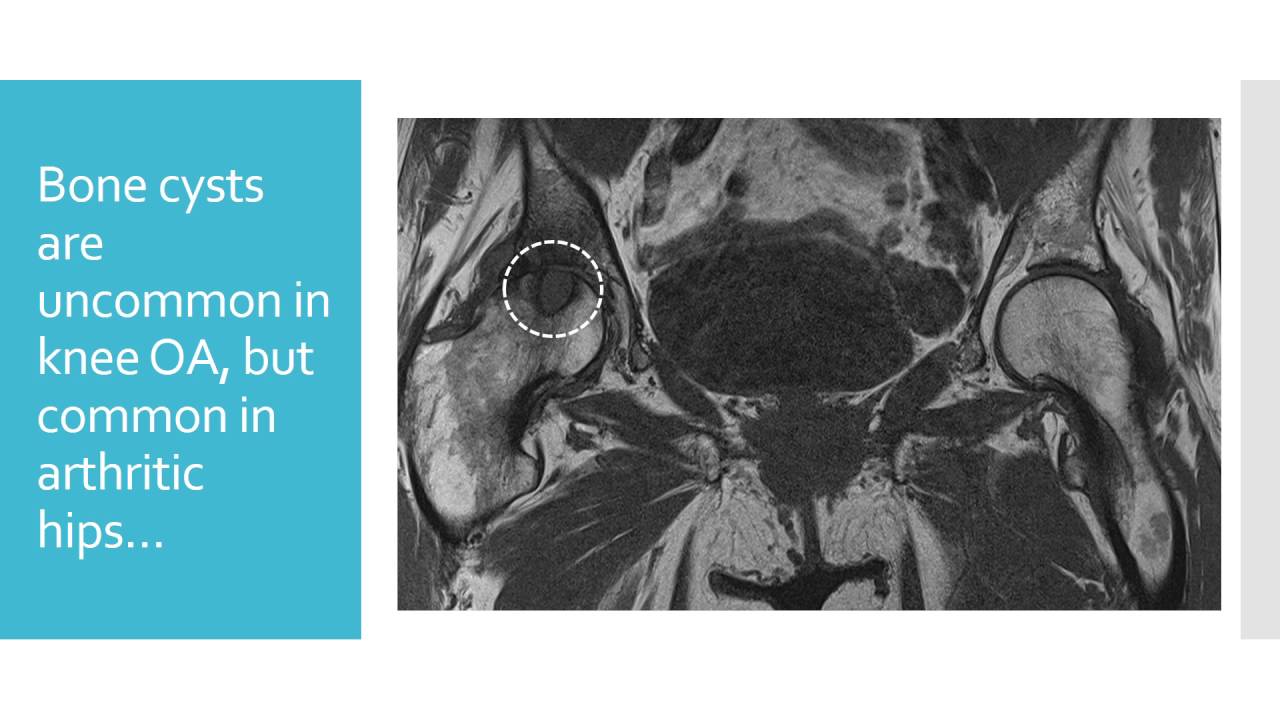 What This Means for Stem Cell Treatments for Hip Arthritis

The fact that arthritis of the hip occurs and progresses rapidly and is so closely associated with BMLs and bone cysts suggests to us that hip arthritis is as much a bone disease as it is a joint disease, so, importantly, stem cell treatments should be focused not only on the joint but also the bone. And because as we’ve discussed, hips have fewer local stem cells than the knees and lack the same ability to self-repair, this, again, emphasizes the importance of early intervention with a diagnosis of arthritis in the hip, as once it gets to the point of severe hip arthritis in patients over 55, treating it nonsurgically can be much more challenging, and may not be possible. Our candidacy ratings for hip arthritis reflect these findings.

When hip arthritis is treated at the right stage, precisely injecting the BMLs with stem cells, using imaging guidance, can often reliably treat the bone. Additionally, for severe hip arthritis, the right candidates may benefit from a culture-expanded stem cell procedure (only available in the Grand Caymans) that floods the hip joint with many more stem cells that the same-day procedure can provide.

So if you’re wondering, Why is my hip arthritis getting bad so fast? it’s highly possible you may have one or more bone marrow lesions, and it’s imperative that you address the situation quickly, before you’re dealing bone cysts and severe hip arthritis, if you want to save your hip from an aggressive and highly invasive surgery.