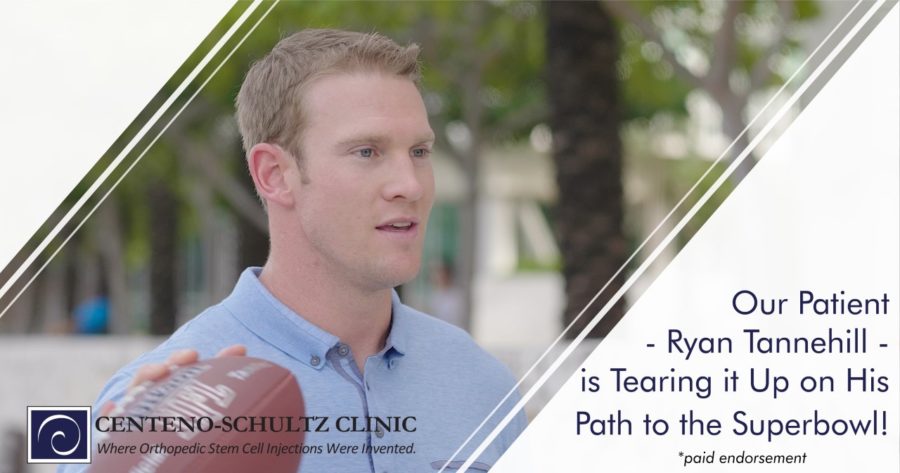 We’ve treated a bunch of professional athletes through the years at Centeno-Schultz and at our licensed advanced treatment site in Grand Cayman. One of those athletes is Ryan Tannehill who is now going to be in the run-up to the super bowl. We couldn’t be happier that maybe just maybe, we’ve helped Ryan prolong his career.

I first met Ryan a few years ago when he needed treatment for his ACL. My first impression was that this was a really smart kid. He confirmed that when he told me that he wanted to become a doctor if he didn’t get drafted into the NFL, but fate chose a different path for him.

Going out to dinner with Ryan and bringing two of my kids was a real treat. He’s a real guy, as he spent a good hour talking to my then 12-year-old son about fishing. Meaning, there is nothing false about this kid, what you see is what you get. What you see is a regular guy who is humble and talented, a rare combo.

I remember when he told me that he was going to Tennessee. He said it would be a new adventure. Wow, was that the understatement of the century!

Ryan has been seen a number of times at our licensed stem cell culture facility in Grand Cayman. We’ve treated lots of aches and pain due to old injuries that lots of NFL athletes accumulate through the years. We also treated his ACL after his surgery, to help the healing and cartilage. Ryan has his own stem cells banked at Regenexx Cayman, and he can use those cells, which have been grown to greater numbers, to continue to stay ahead of his game.

We’ve helped many athletes from the pros to college to high school. Football, baseball, basketball, hockey and everything in between. They all share the same story. They want to avoid often career-ending surgery or to enhance the results if they need surgery. In addition, many want to stay ahead of those aches and pains while they’re small before they blow up into a big deal.

The upshot? We’re so happy to see Ryan Tannehill playing well again and back in the game. The fact that he’s leading a team through the playoffs and hopefully into the super bowl is a testament to his hard work and smarts. We hope that what we did helped a little as well. We wish him the best in the playoffs!