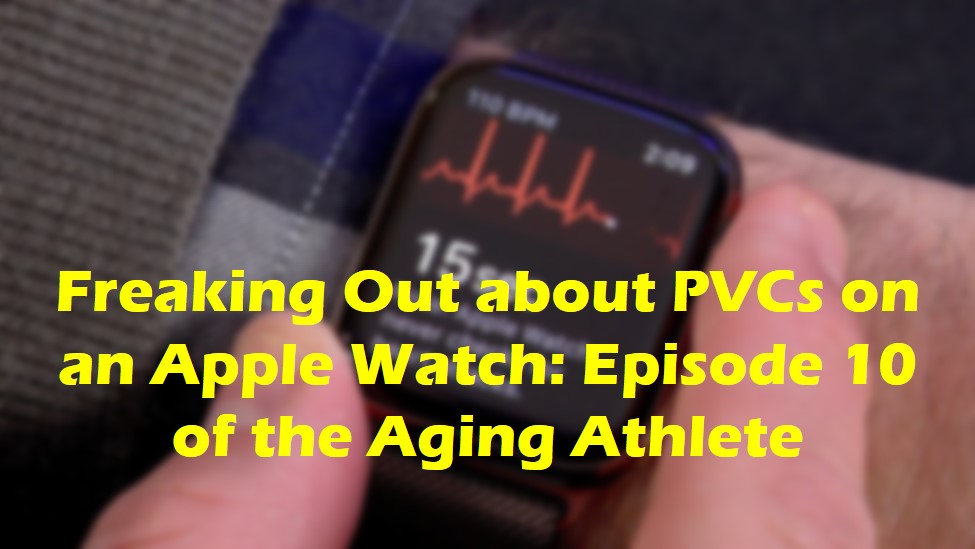 I’m getting older, which is the “aging” part of the title. In addition, my family has a history of heart disease, so I wanted to start getting proactive about my ticker. This began a journey that begins with a new Apple Watch for Christmas and a discovery that rocked my world. In addition, let’s dive into the newly emerging world of smart device health monitoring and how that could eventually save many lives.

I drew my heart genes from a very bad deck of cards. My dad had cardiac bypass surgery in his 60s and his father perished from a sudden death heart attack. On my mother’s side of the family are many heart stents and then, oh, by the way, her dad also perished from another sudden-death heart attack in his 60s. I guess the good news is that I did hear from a friend in medical school that he had a worse cardiac history. All of the men in his family had died in their 40s and 50s from a heart attack.

So what’s the good news about my bad genes? We’re entering a brave new world of constant health monitoring that will change everything. In the next 20 years, we’ll see a range of devices that exist in the background of our lives that are always looking for small problems while they’re still small. One of the pioneers in this new world is Apple. Why? They were the first company to get FDA approval for their watch to monitor the heart. Let’s dig into what they’ve accomplished in a short time.

One of the big transformations that we’ll see over the next few decades is that the information that doctors need to make a decision is far more than the information that machines need. Take for example an MRI. We place a patient in a strong magnetic field and then vary that energy to produce radio waves from the tissue. We then take all of that information to produce an image. Why is the image needed? Because the doctor needs something to look at that he or she can understand. However, critical information is lost by producing that image. Hence, it actually makes much more sense for a machine to read the data and look for certain issues rather than creating an image for a doctor to view. While this may seem strange, it ties in nicely to what Apple is doing.

Cardiologists are used to seeing a 6 lead EKG. That’s a recording of the heart’s electrical activity from 6 different sites around the body. Why? It provides maximum information about what happening in the heart. Apple and anyone else that wants to make an accurate EKG watch has a problem as they’re only measuring electrical activity from one site (your wrist). A recent study got around this by using the watch in different locations like on the ankle or touching it to the chest (1).

However, do you really need 6 leads? Or is this just something that we humans need, but that isn’t needed if a machine does the EKG interpretation? Well, Apple just published a large study with Stanford Health on using just the watch to accurately tell when someone has atrial fibrillation (2). In this study, they mailed EKG patches to people whose watches said they had problems, getting a second reading.

Afib is a condition impacting 6 million Americans where the heart beats irregularly and can lead to a heart attack or stroke. Hence, the idea that you could detect this problem in its early stages is a game-changer. Meaning, many people walk around with Afib and don’t know it and the first sign they have an issue is when they hit the ER with a stroke.

My Heart and the Apple Watch

To get an EKG with the series 5 Apple Watch, you put your finger on the crown and you can see what we physicians call the “Lead 1” recording. When I first tried this, I noticed a few PVC’s (see left in the circle). These are Premature Ventricular Contractions. Meaning the bottom ventricle fires off at the wrong time, which doesn’t pump much blood. The interesting thing is that every time my watch recorded one of these rare events, I could feel it as a weird heartbeat that referred to the back of my throat. Basically, I was seeing in real-time what my heart was doing and confirming that specific abnormal heartbeat to what my body felt. I was blown away.

Should I be worried? Likely not as rare PVCs that don’t cause symptoms usually aren’t a concern (3). However, digging into this issue in the US National Library of Medicine, I found that what we know about PVCs comes from a “sick model” of healthcare. Meaning what we know is from patients with really bad hearts. We don’t know the predictive value of PVCs in a large group of patients all wearing EKG monitors on their wrists.

One of the interesting things is that PVCs have been associated with lots of things including caffeine and alcohol consumption. I haven’t seen many since my first night using the watch. However, I can now start to associate these with what I’m doing or consuming and learn that my heart doesn’t like.

I think Apple and other companies are about to unleash a vast array of products that track our health and use information from hundreds of thousands of people to predict disease. Meaning diagnosis is about to move from “sick care” that happens after someone has life-changing symptoms or disease to “healthy care” where someone’s watch or other sensor picks up a patient at risk for a serious disease.

So if you have a family history of heart problems, no matter how healthy you think you are, an Apple Watch (the latest series 4 or 5) is a good bet. It’s likely the company will introduce other features via software updates once they get FDA approval like measuring oxygen levels. It’s also likely that they will continue to fund studies that look for other heart problems outside of Afib like the detection of subtle heart rhythm abnormalities that predict an imminent heart attack.

The upshot? We’re entering into a brave new world of wearable health monitors that will both save lives and save the healthcare system money. Why? It’s always cheaper to find a disease before it gets bad, which is the big picture point of this blog series. Detect and treat small problems while they’re small, whether that problem is in your shoulder or your heart.