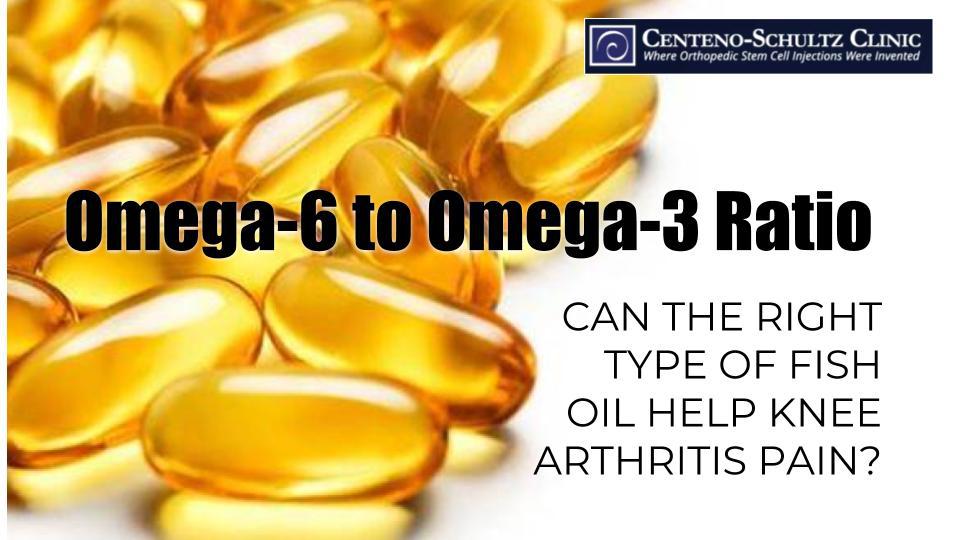 The polyunsaturated fatty acids omega-6 and omega-3 are essential for keeping our cells, brain, bones, skin, heart, and much more healthy. Many studies have shown that the omega-3 fatty acids available in fish oil may be beneficial to our joints as well. Today, we’re going to review another study that digs in a bit deeper, suggesting it’s the ratio of omega-6 to omega-3 consumed that really matters, and it may even help with knee arthritis pain. First, let’s learn more about these omegas.

As mentioned, omega-6 and omega-3 are essential polyunsaturated fatty acids. Our bodies, however, can’t self-produce either. This means we must obtain them through a proper diet. Omega-3 can be found in salmon, eggs, sardines, flaxseed, walnuts, olive oil, and vegetables (e.g., spinach). Omega-6 can be found in pork, chicken, grain-fed beef (interestingly, grass-fed beef is typically higher in omega-3), walnuts, sesame seeds, eggs, mayonnaise, and many vegetable oils (e.g., corn oil, canola oil, etc.).

Healthy sources, not the junk-food sources described above, of both omega-6 and omega-3 are essential for good health. The key is that good health is not necessarily a result of how much of each omega we consume but of the proper ratio between the two. The general recommendation typically given is that the omega-6:omega-3 ratio should average around 4:1. In other words, four parts omega-6 to every one part of omega-3. So if you consume 160 mg of omega-6, you should consume at least 40 mg of omega-3. You may also see even lower omega-6:omega-3 ratios recommended (e.g., 2:1 or 1:1). An eye-opening statistic shows that the average American diet omega-6:omega-3 ratio is a whopping 16:1 or higher. So when considering your omega-6 and omega-3, those raw numbers shouldn’t be the focus; it’s all about the ratio.

Let’s take a look at one study that investigated omega-6 to omega-3 ratios and how these might relate to knee arthritis pain.

One study analyzed 167 subjects with knee arthritis. Each subject was grouped into one of four omega-6:omega-3 ratio levels. Comparisons were studied relating to pain, function, and perceived stress between the lowest and highest ratio groups. The result? The subjects in the high-ratio (meaning a high omega-6 to omega-3 ratio) group had greater knee pain, more limitations in knee function, and higher knee stress than the low-ratio (meaning a low omega-6 to omega-3 ratio) group.

How to Lower Your Omega-6: Omega-3 Ratio

Fish oil supplementation can also help get that omega-3 number up to improve that ratio. However, just grabbing a bulk supply of those discounted fish oil supplements from Costco isn’t likely to be much help here, especially for relieving arthritis and keeping the joints healthy. It’s imperative that you find higher quality fish oil to control inflammation.

Both omega-6 and omega-3 are absolutely essential for proper health! However, it’s time to stop focusing on the raw numbers and start focusing on the omega 6 to omega 3 ratio. Eliminate or drastically minimize junk food consumption, adopt a permanent low omega-6:omega-3 ratio diet, and start taking high-quality fish oil daily. Before you know it, those ratios will be where they need to be. And if you have arthritis knee pain, a potential added bonus may be healthier knees and less pain in the process.