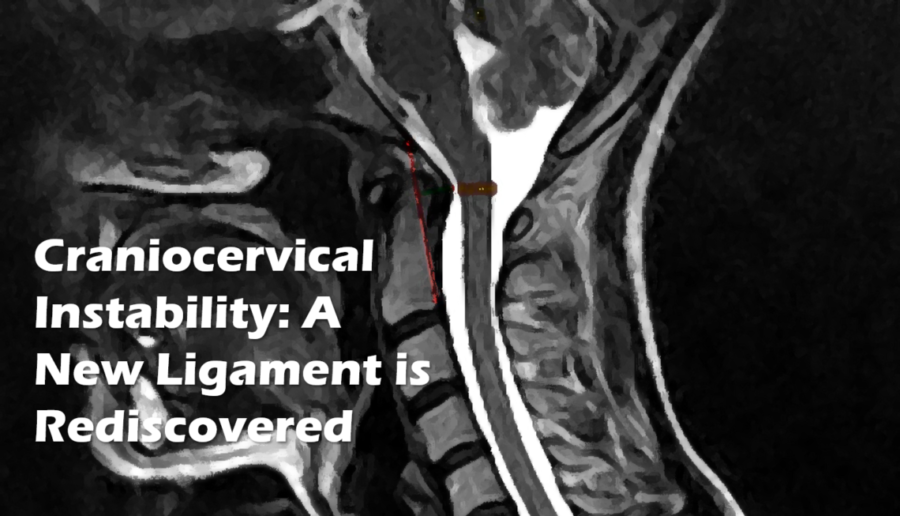 There are ligaments that hold your head on and they can be injured just like any other ligament. Some of these structures your average physician only obliquely know about, some only super-specialists know, and some, like today’s ligament, is so obscure that it needed to be rediscovered by scientists. It’s all very exciting because it is useful for the treatment of craniocervical instability or “CCI.”  It’s called the “superficial anterior atlanto-occipital ligament.” Let’s dig in.

The main ligaments that hold your head on with names that most physicians would somewhat recognize are the alar and transverse ligaments:

The alar ligaments in red reach from the C2 vertebra to the skull and the transverse ligament in yellow acts like a seat belt for the dens of C2, attaching it to the atlas (C1).

There Are Lots of Other Ligaments Involved in Craniocervical Instability

The two above are the beginning. There are a slew of ligaments that only super-specialists who treat Craniocervical Instability would recognize. For example, we have the following ligaments:

It’s perhaps a bit unsettling that physicians and scientists are still discovering parts of the body we didn’t know about. For example, a new ligament was discovered in the knee called the Anterior Lateral Ligament (ALL). How was it missed? It blends in with the joint capsule and nobody really put 2 and 2 together to recognize that this thick band had an actual purpose supporting the role of the well-known ACL ligament.

This new craniocervical ligament is more of a rediscovery (1). Meaning it’s been described before, but not in detail and nobody ventured a guess as to what it actually did. Now a group has done that, so what is it?

It’s called the Superficial Anterior Atlanto-occipital Ligament (SAAOL). It lives in the front of the spine, high up in the neck between the front of the C1 bone (atlas) and skull. It provides stability for C1 on the skull when the head and neck are in extension. It also continues south to C2 (different name) and provides the same stability for C1 on C2. I have outlined it in red below (left image).

As reviewed, this gets tight when your head goes back:

Can this Ligament Be Treated?

First, the good news is that it’s easy to see on MRI (assuming the cuts are thin enough). Hence, a change in its appearance should be easy to see. The function of the ligament can also be accessed on DMX. So if it’s lax or damaged, this should be able to be diagnosed.

In addition, injecting the ligament should be easy with our PICL procedure for craniocervical instability. It should just take a slight modification and in some patients, we have likely been already injecting it as we exit and inject the ALL ligament and longus capitus muscles/tendons. Here’s an example of Dr. Schultz injecting this ligament:

The upshot? We’ve seen this ligament for years but just assumed that it was the northward extension of the duct tape type ligament (ALL) that lives in the front of the spine. What’s new here is the realization that this duct tape is thicker at this spot to help support the skull on C1 and C2 in extension. The good news is that we’re already set up to treat this ligament with the PICL procedure so you can skip the fusion.