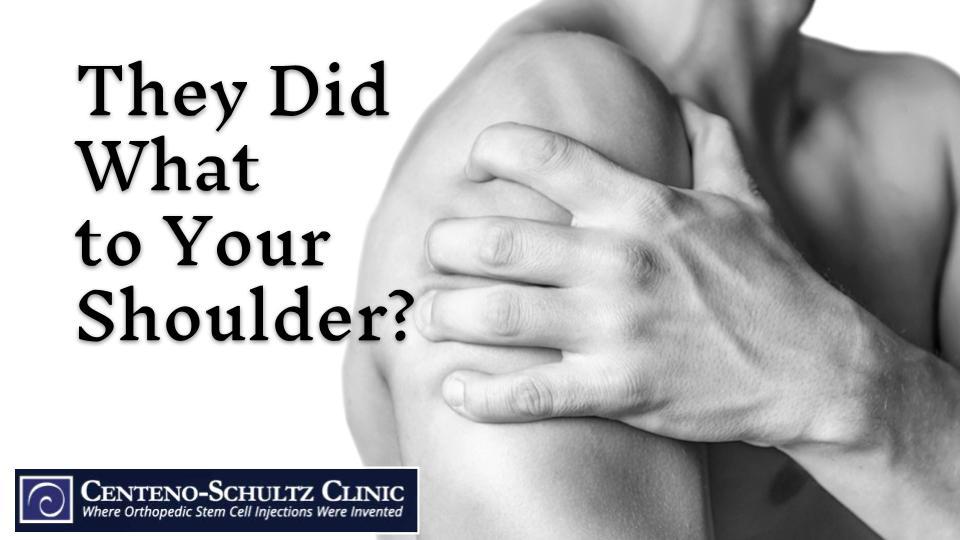 We’ve added yet another surgery to our dumb-surgeries list here at the clinic. You’d think after all these years, the crazy surgeries patients come to us after having endured wouldn’t still shock us. Unfortunately, however, we still seem to be thinking, They did what to you? a bit too often when these patients are explaining their ordeals. Recently, it was a patient whose shoulder was now a mess after having undergone a biceps tenodesis.

What Is Biceps Tenodesis?

The biceps tendon (the long tendon in the image to the right) stretches up along the humerus (the upper-arm bone) and rests in a groove, attaching to the top of the shoulder at the labrum (the lip around the socket of the joint). When a surgeon performs a biceps tenodesis, the tendon is detached from the shoulder socket and reattached somewhere else, typically lower in the groove on the bone.

Why would a biceps tenodesis be done? The idea is to release the pressure on the biceps tendon. It’s sometimes done during a rotator cuff repair in an older person when the tendon is found to be inflamed. It may also be performed in younger patients who experience a SLAP tear of the shoulder labrum. The superior labrum is the top area of the shoulder labrum, and a tear in the superior labrum is called a SLAP tear.

The side effects of the surgery are many and include failure of the reattachment, chronic pain, and infection. One study also described complications such as cramping of the muscle, loss of strength, making it difficult to bend the elbow or rotate the forearm upward, hematoma, and even cosmetic deformities in the appearance of the biceps muscle.

Research is severely lacking on biceps tenodesis. Outcomes of the surgery can only be properly measured through randomized controlled trials, which randomly place participants into a test (biceps tenodesis group) or control group (placebo, or sham surgery, group) and compare and report results. Regrettably, there are few such studies. In fact, we could only find one to share.

This study focused on SLAP II tears of the shoulder and compared the results of sham surgery to biceps tenodesis and SLAP repair. In a SLAP II tear, where the biceps tendon attaches at the labrum rim is torn. There were three groups: a sham surgery group in which only the approach was done, no actual surgery; a SLAP repair group in which the tear only was repaired; and a biceps tenodesis in which the tendon was detached and reattched elsewhere to release the pressure from the torn labrum and allow it to heal.

Which group fared best? None of them! There was no significant difference in any of the groups.   This means the SLAP repair and the biceps tenodesis were no more effective than no surgery at all.

While the study above suggests biceps tenodesis is an ineffective surgery to begin with, since there are also interventional orthopedics options today for biceps tendon issues, there’s even more reason that biceps tenodesis really should be scratched off the modern-day orthopedics docket. In our experience, precise and advanced image-guided injections of orthobiologics (e.g., stem cells, PRP, etc.) can treat both the labrum tears and the damaged biceps tendon, and the tendon never has to be ripped from its attachment. Learn more about this from Dr. Schultz as he walks us through an actual shoulder treatment (including the labrum and biceps tendon) in the video below:

Research doesn’t support that a biceps tenodesis is any more effective than a fake surgery, so this one goes on our dumb surgeries list. Further justifying this placement is the fact that skipping the orthopedic surgeon and, instead, seeing an interventional orthopedic physician who can perform precise injections into both the SLAP tear in the labrum and the damaged biceps tendon can, in most cases, address shoulder pain and improve shoulder function.

Learn more about your elbow condition and how Interventional Orthopedics can prevent the need for surgery by reading Orthopedics 2.0.