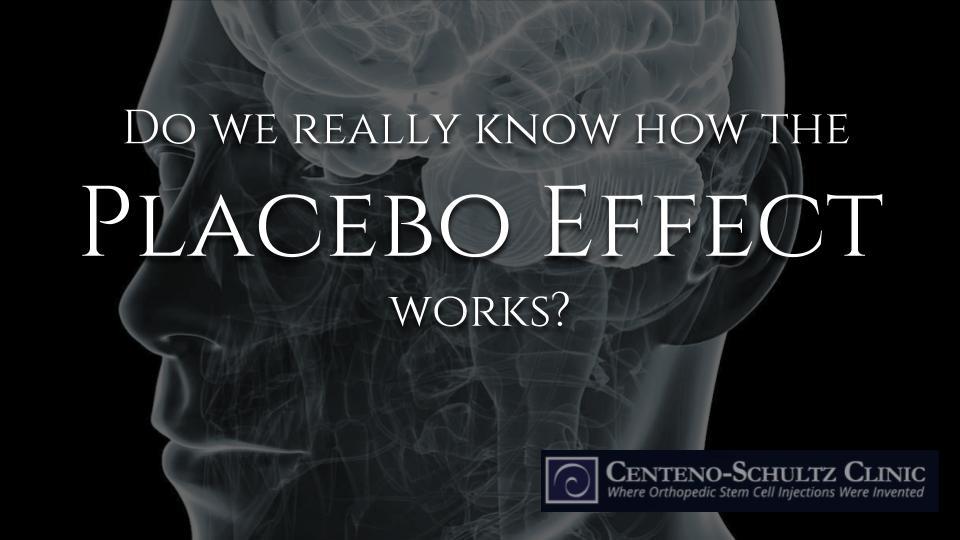 We’re going to explore this by taking a look at how the brain reacts to a placebo. First, however, to understand the placebo effect, you need to understand what a placebo is.

The Placebo Is the Control

In scientific study, a placebo is the control that is measured against the actual test element, or treatment. In randomized controlled trials (RCTs), subjects are randomly placed into two or more groups. One of those is the control group, which receives the inactive placebo. The other group is the test group, which receives the active treatment. Comparisons are made between the two to determine results.

Test Treatment vs. Placebo in RCTs

For example, in one RCT, researchers wanted to determine how the supplements glucosamine and chondroitin affected arthritis. Glucosamine and chondroitin were given to one group (the test group), and look-a-like tablets that contained no supplements were given to the other group (the placebo group). These faux treatments are typically made from some neutral, nonmedicinal substance, such as saline, starch, and so on. Placebos don’t just involve fake medicines or supplements; a placebo can also be a sham surgery…

Surgical experiments also need a control to measure results against, and this is accomplished via a placebo surgery. In other words, subjects in the test group receive the actual surgery or procedure, while subjects in the control group receive the surgical approach only. We shared vertebroplasty (a procedure that injects cement into a fractured vertebra) study a few months ago where test subjects received the cement injections while a second group of subjects received the approach (the needle insertion with simulated injection) but no actual cement was injected.

To eliminate any possibility of bias in reporting outcomes and results, many RCTs perform these experiments “blind,” meaning the participants in the study do not know whether they are in the test group or the control group throughout the duration of the study period. Sometimes these studies are “double-blind,” which means neither the participants nor the investigators collecting the data know which group the participants are in.

What Is a Placebo Effect?

So is the placebo effect all in the head, or is there really something to it? Let’s answer this question by exploring how a placebo treatment is perceived by the brain.

The Problem with the Placebo Effect: The Brain Doesn’t Recognize It

Throughout our body, we have nerve receptors called nociceptors. When we stub a toe, for example, it’s these nociceptors that transmit the signals through our nervous system to our brain, and it’s our brain that then tells us our stubbed toe hurts. The brain’s response to pain from some type of external stimulus (e.g., fracture, burn, etc.) is called nociceptive pain, and it can be measured via the neurologic pain signal (NPS).

One study was conducted to determine how placebo treatments were processed by the brain. The study found that while patients may report some relief of pain following a placebo treatment, the actual brain response (NPS measurement) to nociceptive pain was very minimal. In other words, the brain isn’t really recognizing the placebo effect as it relates to pain. So if there is an actual placebo effect happening, it must be happening somewhere else, not via the nociceptive pain pathways to the brain.

So what’s causing the placebo effect, and where is it happening? Is it really happening at all if the brain isn’t onboard? Other studies have questioned the significance of a placebo effect. Some researchers believe the placebo itself is actually just a form of therapy. For example, a saline placebo injected into a knee may provide temporary relief simply by cleansing out the toxic chemicals. So another problem with the placebo effect in some cases is that it may not really be a placebo effect at all; it may just be treatment!