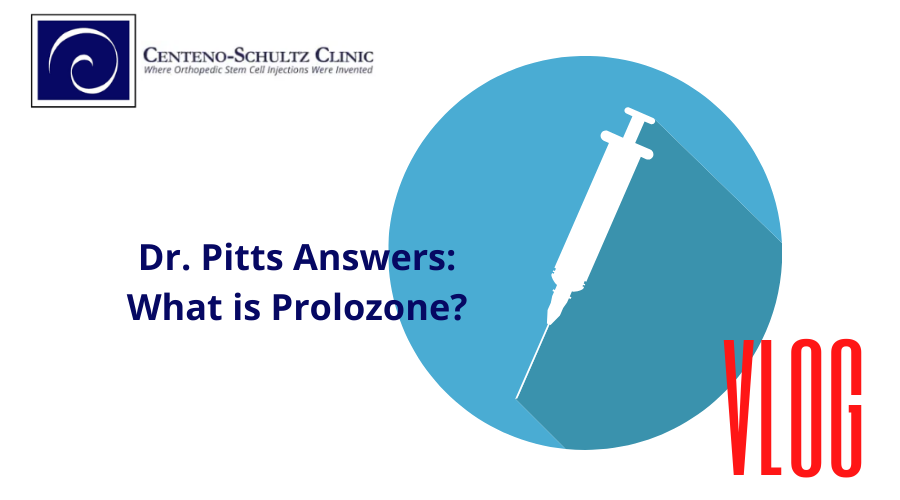 Dr. John Pitts describes Prolozone: what it is, what it’s used for, what the research has shown about it, and an overall assessment of its efficacy.

Hello, everybody. This is Dr. John Pitts, from the Centeno-Schultz Clinic. Today, I like to talk to you about Prolozone.

So what is Prolozone?

The first word means “proliferative,” means stimulate some proliferation and repair of tissue. And last part is “Ozone,” which is the gas that’s found in the atmosphere that protects us from some of the harmful UV rays from the sun, used for proliferation in musculoskeletal medicine.

So what is Prolozone typically used for?

So, Prolozone is an injection typically used inside of a joint such as a knee, into a disc or into muscles to try to stimulate repair, improve pain, and function in those areas. Many times it’s combined with some vitamins. And this may be comparable to a prolotherapy injection, which is typically just a sugar water injection.

And so is this therapy safe?

Based on the evidence is maybe mostly safe, but a lot of the machines used to make ozone aren’t necessarily sterile, even though ozone does have a strong anti-microbial effect. I have seen a case of someone having a really bad infection being injected into a disc from this therapy.

And so what about the evidence that Prolozone can help musculoskeletal problems?

So there’s this couple randomized controlled trials I was able to find on Prolozone for things such as knee arthritis. And they compared it to a placebo injection, which is maybe just saline or compared to a typical injection of prolotherapy or hyaluronic acid. And basically it was better than the placebo injection, but it was no better than hyaluronic acid or prolotherapy injection. And most of these studies were small numbers of patients and only followed the patients up for one or two months.

If you compare Prolozone to something like PRP, Dr. Centeno just blogged on randomized controlled trials related to PRP: there were 29 studies that are out at this time, and they compared PRP to things such as prolotherapy, hyaluronic acid, steroid injections, medications, therapy. And in 28 of those 29 studies, PRP was significantly better than a placebo, or the alternative injection, or medicine, or therapy. The results were a larger number of patients, for the most part, and for longer follow up, up to a couple of years or so.

So, in conclusion, based on the evidence, based on my experience with patients, Prolozone could potentially be a short term benefit therapy — that’s maybe not much better than something simple like prolotherapy,  or hyaluronic acid, and certainly does not have as much evidence, or safety profile, or a long term follow-up as PRP, which has excellent evidence now, that it helps with things such as knee arthritis and many other musculoskeletal problems.

Related: “What is Neural Prolo?“

Dr. Pitts is originally from Chicago, IL but is a medical graduate of Vanderbilt School of Medicine in Nashville, TN. After Vanderbilt, he completed a residency in Physical Medicine and Rehabilitation (PM&R) at Emory University in Atlanta, GA. The focus of PM&R is the restoration of function and quality of life. In residency, he gained much experience in musculoskeletal medicine, rehabilitation, spine, and sports medicine along with some regenerative medicine. He also gained significant experience in fluoroscopically guided spinal procedures and peripheral injections. However, Dr. Pitts wanted to broaden his skills and treatment options beyond the current typical standards of care.