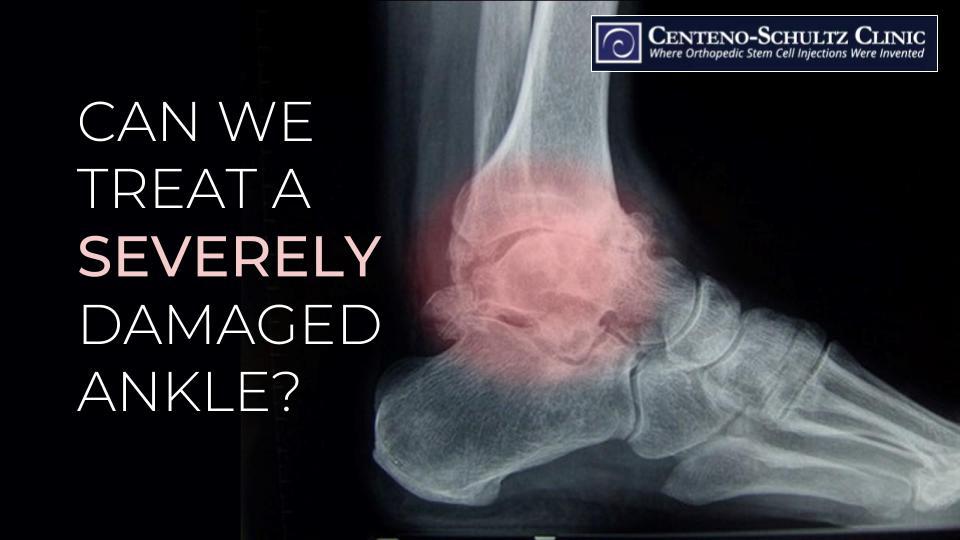 When Dr. Centeno first saw Don in the clinic, Don’s injured ankle was double the size of his other ankle. The MRI of his talus bone looked a bit like a bomb had exploded in this area of the ankle. His severely damaged ankle was also very arthritic, we weren’t certain stem cells could help, and Dr. Centeno gave him a poor candidacy status. Despite this, Don still opted to undergo stem cell treatment in an attempt to relieve some of his ankle pain, and we are glad he did as his outcomes far exceeded expectations. Let’s learn more about his story.

The History of Don’s Ankle Injury

Don’s ankle problem started way back in the early ’80s when he fractured the ankle. To repair the fractured bones, hardware was surgically inserted to fix the bones in place. Unfortunately, the ankle become infected, prompting removal of the hardware. Surgery after surgery followed. One of these was a free-flap surgery.

In the free-flap surgery, in order to increase blood supply to the damaged area and increase its potential to heal, muscle was excised from his calf and sewn over the nonhealing and infected bone. This was the reason his ankle was now twice the size of the other one—it looked as if a tumor had grown around his ankle.

Despite the appearance, his ankle responded fairly well to the surgery…until many years later when his main ankle joint, understandably, began to get arthritis. By the time he first arrived at our clinic to see Dr. Centeno, his pain was clocking 8 out of 10, and he was chronically on medications to attempt to ease the pain.

Don’s talus bone, is marked on the MRI image to the left above. This is one of two bones form the largest ankle joint—the other is the distal end of the tibia leg bone. On the right is an animated GIF image of slices of the ankle. The normal bones in his ankle on this MRI sequence are black. The bright areas are fractured, unhealed talus bone. Unfortunately, this MRI also showed that some of his fractures were impacting his tibiotalar joint. The result? A fragmented mess of unhealed bone fractures.

Due to Don’s severely damaged ankle and the severity of the arthritis, Dr. Centeno recommended cultured stem cells, which meant our Regenexx-C treatment would be performed at our licensed advanced site in Grand Cayman. Culturing the stem cells would allow us to grow the cells to bigger numbers, which would potentially be more beneficial for the ankle issue we were dealing with, and because we were also treating back and shoulder issues in Don, this would make it more likely that Dr. Centeno would have enough cells for Don’s treatments.

Dr. Centeno decided to only treat the tibiotalar joint rather than the talus bone, as the fragmented condition of the bone could have resulted in the bone just falling apart with the treatment. Injecting the joint only, he hoped the cells would then work their way into the fragmented talus bone. Since the talus was communicating with the tibiotalar joint, it made sense that the cells would reach the talus.

Seven months after his severely damaged ankle with severe arthritis was treated with cultured stem cells, his pain was down to a 2 out of 10. Just as telling, he was off the pain meds and had returned to skiing and other activities he’d been unable to do for years!

Don’s results far exceeded expectations, and it’s always inspiring to see a patient we considered a poor candidate surprise us with their results. There’s nothing more rewarding to us than seeing our patients return to activities they never dreamed they’d be able to do again.

The Regenexx-C procedure is not approved by the US FDA and is only offered in countries via license where culture-expanded autologous cells are permitted via local regulations.