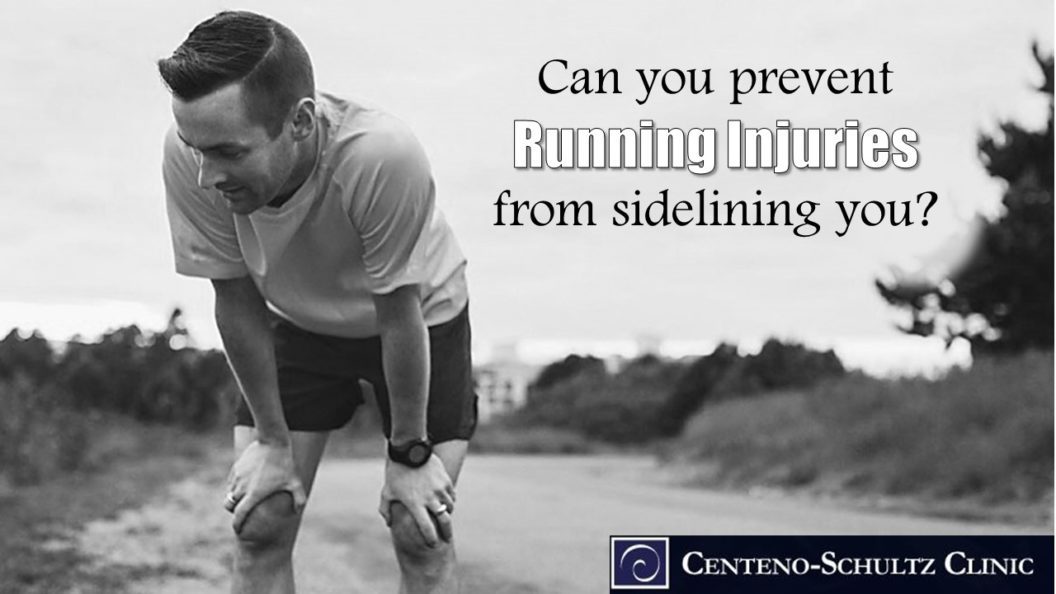 Whether you’re a new runner, life-long runner, young runner, old runner, or anything in between, running injuries can happen. While running injuries are certainly most common in the feet, legs, and hips, they can occur in the upper body as well as the vibrational impact from the foot striking the ground moves up the body.

In addition, if you are a long-time runner, middle age (around age 40 to 50) can present you with a bit of a fork in your running path. If injuries have been minimal to this point, you’ll probably continue on the running path; however, if you’ve had bigger injuries or arthritis is becoming an issue, you’re likely to take the path many runners do at this age and stop running.

Running injuries can occur for a variety of reasons, from something obvious, such as a fall, to something more subtle that builds up over time, such as a stressed knee due to repetitive motions placing abnormal forces in that joint.

Research has also suggested that the reason the lower body suffers more running injuries than the upper body is because the lower body absorbs the brunt of the impact and actually works to protect the upper body by minimizing the vibrational impact as it travels up the body. The lower body seems to do this by making biomechanical adjustments to lessen those impact forces (read more about this study at the link above).

Running Injuries to Watch Out For

So what are some running injuries, and what can we do about them? Let’s review a few, starting at the ankles and working our way up.

Running Injury in the Ankle

Last week, we talked about ankle ligament instability and how ankle pain after walking or running can be a sign. Because ankles are the first structures after the feet to be affected by the vibrational impact of the foot striking the pavement, ankle ligament instability is common with running. The ankles are taking the brunt of the force, and in addition to the added impact stress, at the same time, they also must support the weight of our entire body, more so than any other joint. So it’s certainly not surprising that running injuries are so common in our ankles. If your ankles are consistently sore after a run, this is a good sign you might have a ligament instability.

Running Injury in the Kneecap

Another common running injury is pain in the kneecap, or the patella. However, just because your kneecap hurts, this doesn’t mean the pain is due to a problem in the knee. As we’ve mentioned before, the body is an interconnected system, not a bunch of individual parts and pieces, and many times knee or kneecap pain is due to an issue somewhere else, such as the low back, hip, or buttocks (click on Dr. Centeno’s infographic to the right to learn more on this).

Running Injury in the Back

Does your back get tight or do have more back discomfort in general during or after running? A critical spine stabilizing muscle lives deep in our back called the multifidus muscle (which is actually a series of small fingerlike muscles that our housed in the grooves between the spinous processes at the back of each vertebra). This muscle actively absorbs shock, such as the impact from those vibrational forces with running that make it from the ground and past our lower limbs into the upper body.

An irritated nerve in the back can turn off the signal to the multifidus muscle which stops the muscle from providing stabilization. When this occurs, other muscles that aren’t made to stabilize work overtime to attempt to do the multifidus muscle’s job. This can cause the back to not only tighten up but can also cause muscle spasms. Even more importantly, when the multifidus is off-line, it can signal a problem with the spinal nerves that control your knees or your feet, making them more prone to injury.

Ways to Stop Running Injuries Before They Become Big Problems

Running injuries happen, and your best option is to stop them in their tracks before they become much bigger problems. The sooner you stop them, the better your chance you’ll still be running into middle age and beyond.

So what can you do to stop them? There are many obvious precautions you can take before an injury to protect your ankles, knees, hips, and upper body from the vibration forces of impact. Invest in excellent-quality running shoes, and always warm up your muscles before a run. Change your running patterns regularly (if you are a track runner, simply alternating directions each time you run can accomplish this). If you’re a street or trail runner, alternating the streets or tails you run should do the trick.

If you do experience the signs of a running injury that won’t subside with conservative measures, see your interventional orthopedic physician who will be able to determine the injury and treat it with orthobiologics before it becomes something much bigger, such as arthritis. If you put it off and just keep running through those minor pains and injuries, you may become one of those who has to step off the running path in middle age. Proactively taking precautions with running now won’t guarantee no injuries, but addressing those injuries quickly does increase your chances that you’ll still be running as you age.