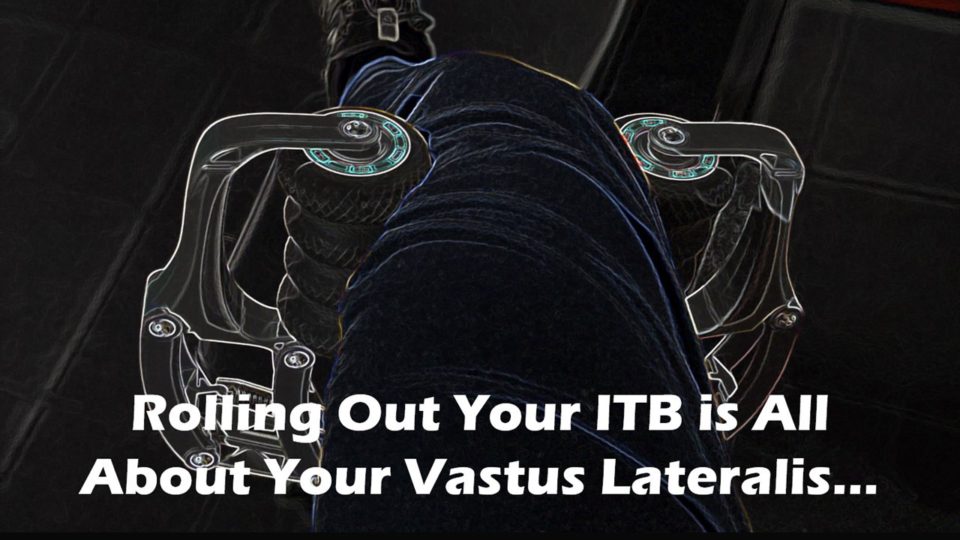 If you’re an aging athlete, you have loads of trigger points and, therefore, vastus lateralis pain. You know what I mean, that small groan you release when you get up from a chair. One of the most problematic areas for all aging athletes is the ITB, yet most of us have no idea why this spot is always tight and that it has to do with a muscle called the vatus lateralis. Hence, today we’ll cover how I perform vastus lateralis trigger point release.

What Are These People Doing?

You see these people at the gym all the time. They’re in a sort of painful ecstasy as they “roll out” their ITB. In fact, if you’re an aging athlete your ITBs are likely plenty tight. You have the cross leg and the straight leg torture techniques:

Then you have the actual foam rollers, which include an embarrassingly quasi-carnal variety of devices:

So what are all of these people doing? Why are they using these torture devices? They are all performing vastus lateralis trigger point release. Let me explain.

The ITB and Vastus Lateralis Pain

The ITB is a fascial band that runs from the side of your hip, all the way down the side of your thigh, to your knee. It’s an acronym for “Ilio-tibial Band”. The muscles at the side of the hip (shown here in red) called the gluteus maximus (the muscle that makes up most of your butt) and the Tensor Fascia Lata jack into the ITB. They help control the ITB tension as well as keep your pelvis from dipping down on the opposite side as you walk. Where’s the vastus lateralis (VL)? The ITB and the VL are actually one and the same, let me explain.

To learn more about the ITB, see my video below:

So if you have tight ITBs that you like to roll out, you’re really just rolling out the trigger points in your vastus lateralis muscle. What’s a trigger point? This is an area in the muscle that doesn’t work well and is tight. It’s usually caused by irritated nerves in your back. Direct pressure on the spot can make it go away.

Since I’m often busy, I don’t mess around with just rolling my ITB with foam rollers, I use what I call “The Claw”:

This device is actually called “Roll Recovery” and it’s a spring-loaded device that rolls out both sides of your leg muscles at once. Here I’m not only rolling out my ITB/VL on the outside, but also my adductors on the other. If you place it the other way, you can roll out your quadriceps and your hamstrings. So you get a “twofer” in advanced trigger point release.

Realizing that Managing Trigger Points May Save your Joints

One of the key take-home points here is that your muscles protect your joints. Irritated nerves in your back can make those muscles laden with trigger points which can make the muscle dysfunctional. This means that it doesn’t contract efficiently and this can fry your joints over time.

Another common issue we see is that since the knee cap is directed in its grove by various quadriceps muscles including the vastus lateralis, problems in this muscle can cause knee cap pain. Meaning, trigger points here can pull the knee cap toward the outside which can cause rubbing between the knee cap and the groove. The pain can also be caused by trigger points themselves.

As an example from my life, after a full day of performing procedures in a heavy lead apron, my left leg will get many trigger points. I use “The Claw” to work those out before exercising for the day as that will allow those muscles to work better at protecting my joints. Meaning an ounce of prevention by getting rid of trigger points goes a long way.