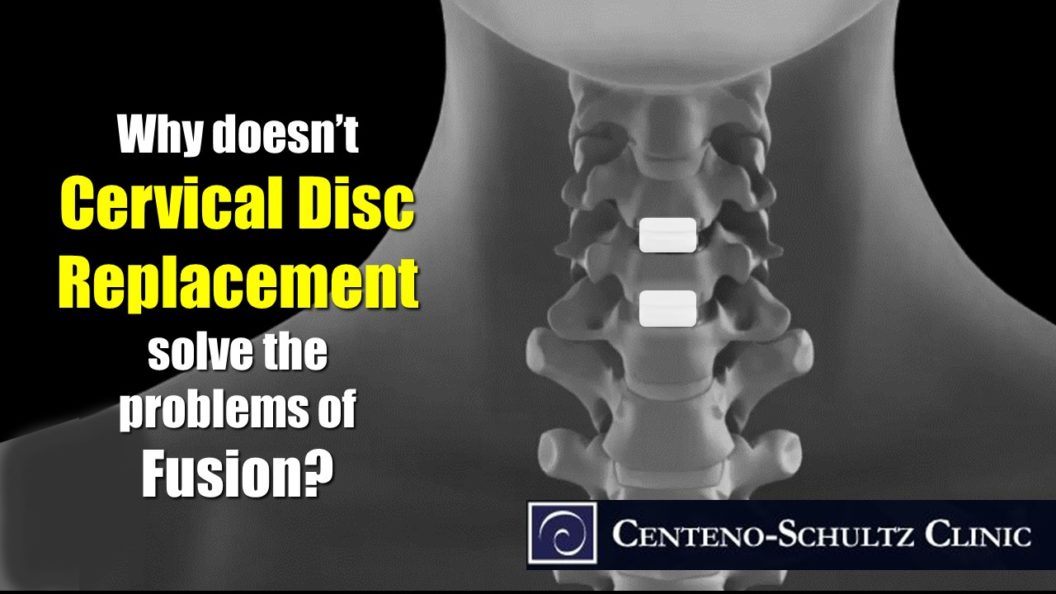 What’s the Difference Between a Cervical Disc Replacement and a Fusion?

During a cervical disc replacement, first the damaged disc is removed and holes are drilled into the vertebrae above and below to accommodate surgical instruments. The vertebral surfaces above and below the disc space are prepared (e.g., a burring instrument is used to shave out bone and smooth the surfaces), and a plastic or metal prosthetic device (looks a like a small hockey puck) is inserted into the disc space.

During a cervical fusion, the surgeon also removes the disc; however, the disc is not replaced. Instead the vertebrae above and below are bolted together using hardware, such as rods, plates, and screws (and bone graft if necessary). Fusions can, and many times do, involve more than one level. The hardware is left on the vertebrae, and over time (usually a few months), the vertebrae fuse, or grow, together. This creates a solid, immovable segment of the spinal column.

While both surgeries are treatments for damaged discs, where they differ is in the result. The cervical disc replacement retains movement in the affected area of the neck, while the cervical fusion disables movement permanently.

One of the major and well-known side effects of spinal fusion is adjacent segment disease (ASD). Cervical disc replacement is often pitched as a fusion alternative that eliminates pain, retains function, and, therefore, reduces ASD risk. But does it really? Let’s review ASD.

What Is Adjacent Segment Disease?

Adjacent segment disease (ASD) occurs when the segments of the spine above and/or below become damaged due to excess strain placed on those areas. When a segment of the neck is rendered permanently immovable by a cervical fusion, those movement forces are distributed to the adjacent segments. Typically, bone spurs and arthritis result from ASD, and as the additional forces wreak havoc on the adjacent segments, more fusions often result, and the disturbing cycle continues. To better understand ASD, see Dr. Centeno’s video below:

Adjacent segment disease, unfortunately, isn’t reserved only for spinal fusions. In fact, the very surgery that is often used to minimize the risk of ASD—cervical disc replacement—has also been shown to cause ASD. So how can this be? After all, cervical disc replacement doesn’t render a segment of the neck immovable. In this case, it’s the opposite effect…

Cervical disc replacement creates too much movement in the spine, causing instability and, again, placing too much force on the adjacent segments to try to correct it. Why does it do this? The native structures in the spine are made for extremely precise and intricate movements. Artificial structures, such as an artificial disc, may fill a space, but they simply can’t provide a perfect functional match to a biological structure. So no matter how minimal the distortion, an artificial disc is still going to overload adjacent structures that attempt to correct the excessive movement and keep the spine from functioning as nature intended. A large study published just last month found specifically that there was no significant decrease in ASD for cervical disc replacement patients when compared to cervical fusion patients.

The push for cervical disc replacement over cervical fusion as a way to minimize ASD risk simply isn’t holding water. Both surgeries are riddled with side effects and create more damage in the process, including ASD, which often leads to even more surgery. Fortunately, however, in all but the most extreme cases, there are nonsurgical interventional orthopedic solutions for cervical disc issues.