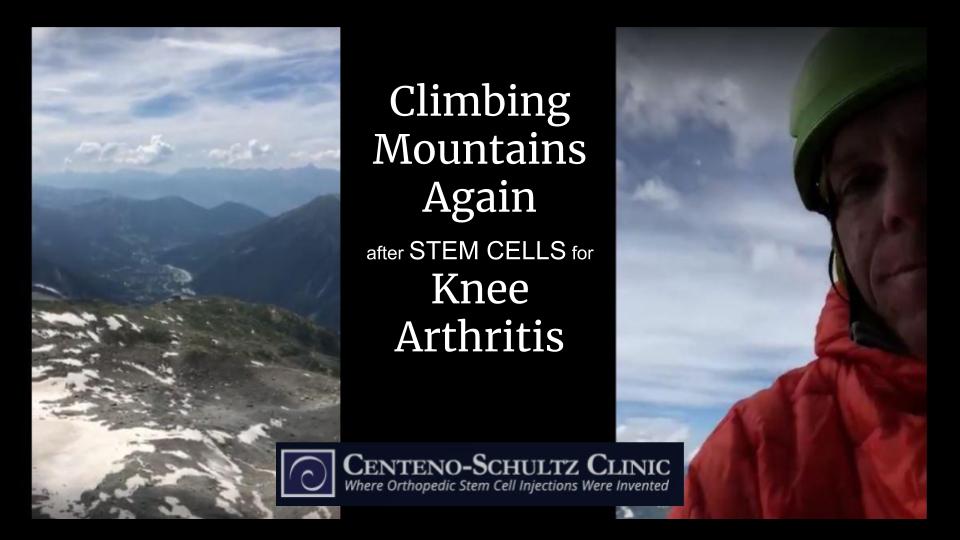 We love hearing inspiring stories from patients who have been able to get back to life and doing what they love, and especially being able to do so without surgery. It’s why we do what we do. A huge bonus is when we get a powerful video, like the one below, allowing us to see a patient’s success after stem cell treatment for knee arthritis.

Mike took a moment while mountain climbing in France to record a self-video to share with us, and we’re so glad he did. Look at those views! While the mountain climb is inspiring all on its own, Mike’s story is particularly moving as, thanks to his bad knees, he’d lost the ability to enjoy these types of activities that had been a normal part of this active and successful adventure-sports entrepreneur’s life. Facing a highly invasive knee replacement and all of its potential complications, he chose against it and made his way to Dr. Hyzy here at the Centeno-Schultz Clinic.

Let’s take a look at this adventure lover’s story.

Over the past few years, Mike’s knees began hurting. Adventure-sports enthusiast that he is, the pain and functional issues progressed, making all of his activities—skiing, hiking, mountain climbing, and so on—difficult. Even climbing stairs became a challenge. While he didn’t have any known injury that caused his aching knees, arthritis had progressed to the point that knee replacement was on the table. Prior to this, he’d undergone knee arthroscopies in both knees and a lateral release of one of his kneecaps. Unfortunately, he was still in pain. Mike also received knee gel injections (SynVisc) and had also tried a PRP knee injection in which the PRP was concentrated using a bedside centrifuge and then injected blindly into his knees. Still no relief.

Why didn’t the blind PRP injection he had before he came to us work? First, bedside centrifuge systems barely concentrate more platelets that whole blood. Even the most advanced of these bedside machines can only produce 5–7X of PRP. Our research has shown that older patients, like Mike, typically require much higher doses that a bedside machine is capable of producing.

Second, PRP is typically not the best orthobiologic for moderate knee arthritis as it often doesn’t respond very well to PRP, maybe a few months relief, if any. What about his surgeries? There is no high-quality research that shows these surgeries can eliminate knee pain or relieve arthritis.

After Mike made his way to Dr. Hyzy, he was evaluated and found to have low back issues that were involved with the pain in his knees. The spinal nerves that branched into his lower limbs, including his knee, were irritated, and, in addition, there was arthritis in his facet joints. In his knees, there was some cartilage loss as well as some ligament laxity, bone marrow swelling, and tendon damage and inflammation.

Mike received stem cell treatment for knee arthritis, but because we treat both the symptom and the cause, all of these structures mentioned above were precisely injected by Dr. Hyzy. The facet joints in Mike’s low back were injected with high-dose PRP, and he received a third-generation platelet lysate epidural (around his irritated nerves). Dr. Hyzy treated Mike’s knee with high-dose (14X) bone marrow stem cells, and all of the other areas above were addressed as well. His treatments required highly advanced skills, which involved not only ultrasound guidance for the joint injection but fluoroscopy for the bone lesions and the multitude of tendons and ligaments that were involved.

There’s a major difference between the PRP and a stem cell treatment for knee arthritis in which we can isolate and concentrate the stem cells in our lab and those that can be produced with a simple bedside machine. Mike’s experience is a good example of this and why it’s so important to use the right biologic for the right job. We’re so happy to see Mike climbing those mountains again.