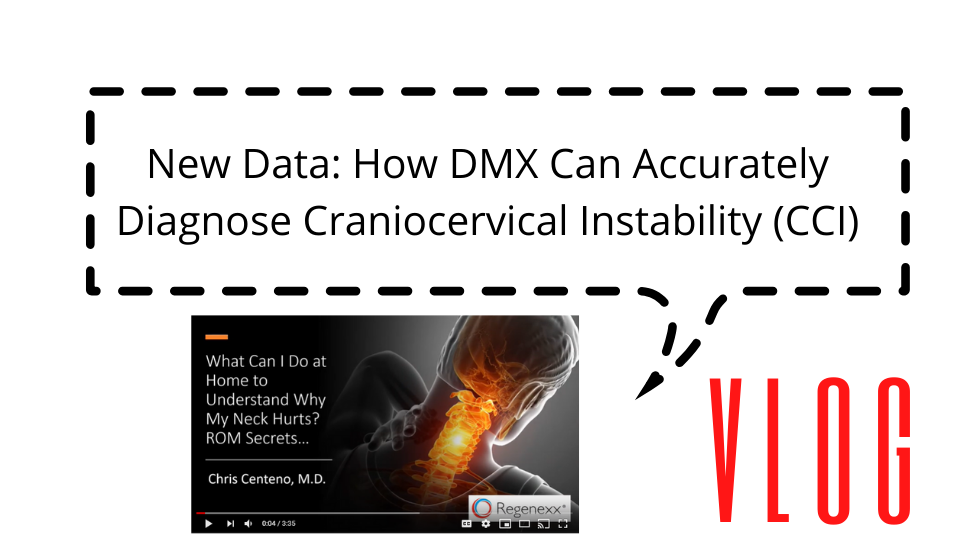 So, one of the problems, however, with diagnosing Cranio-cervical instability that’s usually not talked about very often is that patients without CCI may also have similar measurements to patients with CCI. So, when we do things like Grabb-Oakes or Powers ratio or clivo-axial-angle, there’s some mixture there between patients who are totally normal and have no issues, but will have abnormal measurements, and patients who have Cranio-cervical instability who have abnormal measurements.

“And so, the problem has always been trying to find a measurement that normal people don’t have at all. And I think that may have been done. And that’s why this is so exciting.”

Based on a new study looking at digital motion x-ray or DMX. So, there are two types of imaging that can suggest cranial cervical instability. One is static – or, not moving. The other is dynamic or moving. Obviously, a static image would be something like just a routine MRI where you’re lying face up and face up in a tube, and they go ahead and do your image. Dynamic would be something like DMX or a movement-based MRI where you’re moving around and they’re taking pictures.

One of the ways I’ve been talking about that we can look at dynamic imaging is something called the DMX or digital motion x-ray, and that’s merely an x ray while you’re moving your neck around.

So, it looks something like this. You can see the patient moving. Hence, you’d know that the ligaments are supposed to prevent certain movements. So, the goal here is to try to see if things move too much. (see: 2:04 – 2:14)  Now this has a distinct advantage over a static MRI where the patient is lying face up as the patient is either seated or standing, so it’s weight bearing, hence it’s more likely to show issues and number two – the patient is moving and instability is a dynamic, not a static concept. Meaning if something is unstable, its unstable when it moves, it’s not unstable just sitting there.

So, a new study has finally determined normal values for DMX. We’ve been waiting for this study for a long time. I’ve been involved with it off and on really for the last decade of trying to get this project moving and trying to get enough normal patients imaged.

It was finally published by Freeman and Katz. There’s the citation off to the right there.

So that’s called the Alar ligament. And the new measurement involves the periodontal space, which is shown here, and C1-C2 overhang, which I’ll show on the next slide.

So, the periodontal space is what I have here (see above) it’s the distance between the C1 bone and that C2 bone on either side. And it should be identical, or close to identical on left and right as you move. That means that the Alar ligament is doing its job. Now, in C1-C2 overhang, that’s actually when you tilt your head to the right or to the left, does C1 move out too far or move out  (or at all) versus C2?

So, you can measure that right here. You can see that the C1 is overhanging the C2, when the person bends to one side. So that’s why we call it overhang.

Now, what was interesting about these two measurements is that this new study found that if C1-C2 overhang is more than 2 millimeters and the periodontal space was abnormal – meaning that one side was bigger than the other – then there was 100 percent accuracy with a 0 percent false positive rate in picking out traumatic injuries from normal patients.

It’s extremely rare that any imaging test at all has 100 percent accuracy.

Almost always there’s some crossover in patients who don’t have the disease but still have that imaging finding. So, this is truly remarkable, I think, showing the value of DMX and showing the value of diagnosing cranial-cervical instability this way. And I suspect that even though this was done in traumatic patients, that this likely applies to patients with EDS and other types of connective tissue disorders.

For more information, contact the CCJ Instability Institute at centenoschultz.com, and we can obviously order a digital motion x-ray if you don’t have one. They have these units all over the country, and I think this is extremely important information for patients who suffer from Cranio-cervical instability or who are struggling to get a diagnosis. Thanks for watching, and have a great day!