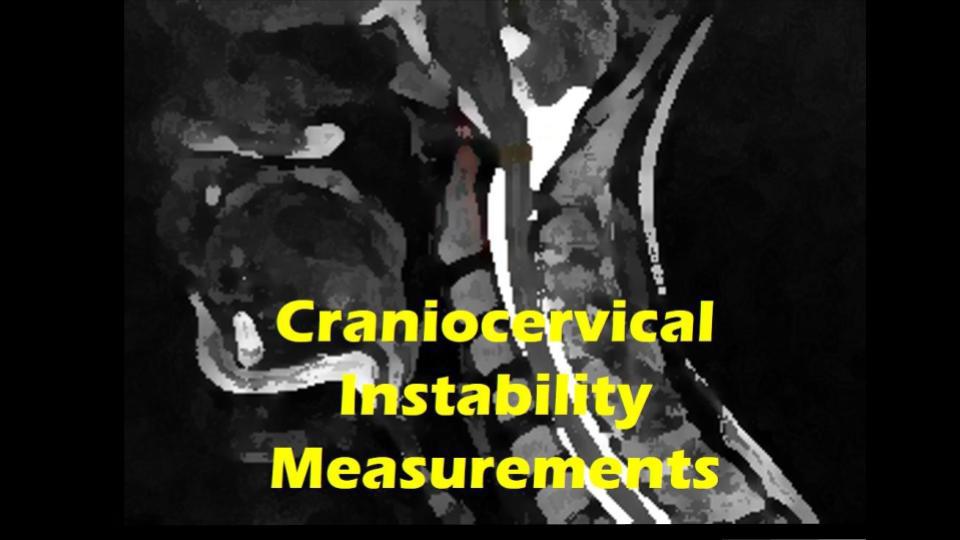 Craniocervical instability is a very misunderstood concept because it’s been made so complex with different measurements and aggressive treatments. Hence, I’ll be writing a series of blogs to try to help patients understand various concepts. Today’s entry is about how CCI measurements relate to instability.

What Is Craniocervical Instability?

Craniocervical Instability has many names including CCI, AAI (Atlantoaxial Instability), CCJ Instability (Cranciocervical Junction), etc…The basic concept is that the ligaments that hold the head on to the spine have become loose and there is too much motion of the head on the neck (1). Note that CCI stands for Craniocervical INSTABILITY, meaning that this is a movement-based concept. This extra movement can cause everything from pressure on the lower brain, brainstem, and spinal cord to irritated nerves, beat up upper neck joints, and damaged tendons.

How Is Craniocervical Instability Measured?

The most confusing thing for patients is often that Craniocervical Instability is a dynamic concept that by definition involves motion. In medicine, for something to be “unstable” means that it moves more than it was designed to and often in the wrong directions. However, since movement-based imaging is new and requires specialized equipment not often found at big university medical centers, physicians and surgeons have substituted the concept of movement-based imaging with static measurements. These are often distances and angles that are measured on a picture without motion. It’s also critical to understand that the average MRI machine images the patient while lying face up in a tube, so the measurements there may be different than those from x-rays taken with the patient standing or sitting (upright imaging).

Let’s dig into some of those static measurements:

This is the distance between the front of the Spinal Canal (often defined by the tooth-like “Dens” that sticks up from the C2 bone) and the line drawn as shown to the left. Given that the C2 bone (Axis) is held against the C1 bone (Atlas) by the Transverse ligament, a high Grabb-Oakes measurement can be due to a lax Transverse ligament. An abnormal measurement is often considered to be 9 mm or more (2). With the advent of flexion-extension MRI (upright MRI (see video below)), it’s easier to measure the G-O measurement when the patient moves, which provides more information. See my video below for more on the G-O measurement:

This is the angle between the Clivus (the inside front on the bottom of the skull) and the back of the Dens (C2). The problem being measured here is the skull is falling forward on the upper neck which can cause irritation of the front the brainstem and upper spinal cord. This movement is controlled by strong ligaments in the back of the neck at the Nuchal, Supraspinous, and Interspinous ligaments. It’s also controlled by the Posterior Atlantoaxial Membrane (PAOM, a ligament at the back of the spinal canal) and to a lesser extent the Transverse ligament. Abnormal is a bit different when reported by different authors. Less than 150 degrees (4) was originally reported with others stating that normal is between 145° to 160° in the neutral position (3). The differences in opinion are likely due to the fact that things like Kyphosis (forward head posture) and male/female sex can change the angle.

This is another measurement that determines if the head has moved forward on the upper neck. This one is more complex, requiring two lines (one between the basion and the back of the Spinal Canal at C1 and another between the Opisthion and the posterior aspect the front of the Atlas) and then some division is applied. If it’s less than 1, the ratio is normal, if it’s >1 then it’s abnormal. To learn more, see my video below:

There are other measurements, but these are the three most common static measurements that patients present with at our CCJ Instability Institute where we treat Craniocervical Instability.

For Craniocervical Instability patients, it’s critical to understand the differences between static and moving studies. Since instability is a movement-based concept, images that capture what happens to the Craniocervical Junction when it moves will always be far superior to static images. However, because this field is newer, these measurements are less established and the data about what’s normal and abnormal is still being collected. Here are common measurements:

DMX stands for Digital Motion X-ray, which is an x-ray that is recorded while the patient moves. The doctor can see the relationship between the bones and when they get out of position with motion, the ligaments holding them are likely injured or stretched out. The two measurements that Craniocervical Instability patients should pay attention to here are C1-C2 Overhang and the ADI.  C1-C2 Overhang is the amount of motion that happens side to side between the C1 and C2 bone when the patient bends their head to the side (6). This is controlled mostly by the Alar and Transverse ligaments. The ADI stands for Atlantodental Interspace (or interval) and is the distance between the back of the anterior Atlas and the front of the Dens when the patient flexes forward. To learn more about both measurements, see my video below:

The problem with traditional MRI is that you’re imaging the patient while lying face up in a tube and this isn’t physiologic (7). Hence, a big boon for Craniocervical Instability patients is that they can be imaged upright in a specialized MRI scanner. This really helps for things like determining if there is a Chiari malformation, as the brain sits how it does while the patient is upright rather than how it looks lying down (8). In addition, allowing flexion and extension to be imaged on MRI can make a big difference. I use the example of a normal Grabb-Oakes that wasn’t really normal when measured in flexion. To see how that works, watch my video below:

How Can Measurements Guide Non-Surgical Care?

Injections to tighten ligaments using Orthobiologics are all about finding the exact targets to inject using precision imaging guidance. Hence, let’s go through a few examples of how these measurements could change those injection targets:

An increased Grabb-Oakes means the Transverse ligament could be lax or damaged, hence the target here is that ligament. The only way this can be reached is with the PICL procedure. see my video below:

An abnormal CXA means the ligaments at the back of the head are loose. Hence, the targets are the Nuchal ligament, Supraspinous/Interspinous, and PAOM. Finally, increased overhang on DMX points directly to the Alar/Transverse ligaments which would again be targeted with the PICL procedure.

The upshot? There’s a big difference between static and movement-based imaging in Craniocervical Instability patients. Understanding how they inter-relate and how they measure some of the same and some different things is critical if you have CCI.