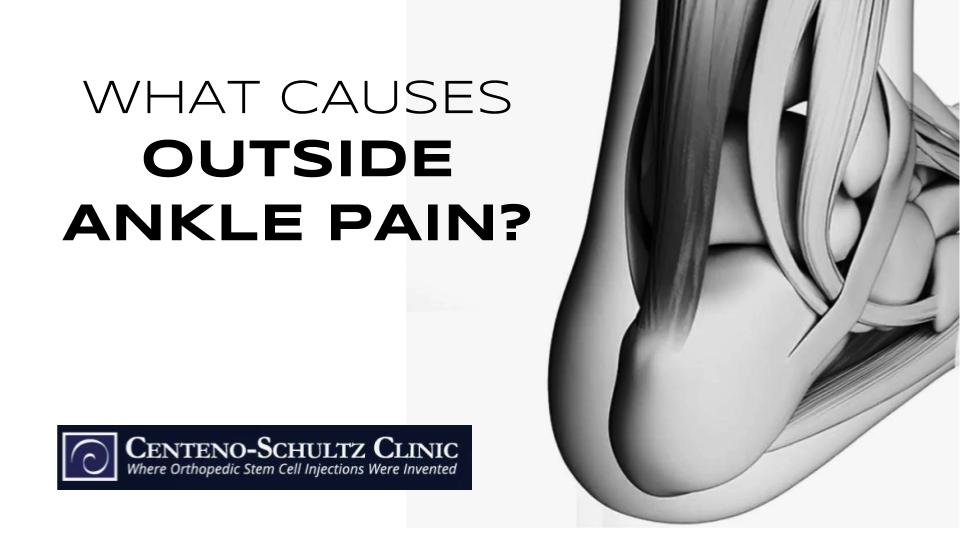 Anatomy Along the Outside of the Ankle

There are a number of structures along the outside of the ankle that could become damaged and cause pain. First, the tendons. The outside of the ankle houses the peroneus brevis tendon and the and peroneus longus tendon. These small but critical tendons can become degenerated (i.e., tendinopathy) or torn, either of which can cause pain. Next we have the nerves. Nerves that start in the lower back and branch all the way down the leg and into the ankle and foot also supply this area, and an irritated nerve all the way up in the back can actually present as pain in the ankle, or anywhere else along the nerve branch.

Finally, we also have to look at the ligaments. The outside of the ankle houses the tibiofibular ligament, lateral ligament, and others, which are small but strong, and their primary job is to stabilize the ankle. These ligaments can become lax, or loose, and can also experience small tears, either of which can lead to outside ankle pain. Today, it’s these ligaments we want to focus on.

What Is Stress Ultrasound Imaging?

In order to best examine ligament strength, we need to be able to see them in motion on imaging. This means MRI, for example, which is a static technology, is not effective for this purpose. an MRI might show a large ligament tear, but we won’t typically see small tears or laxity.

This is why stress ultrasound is critical for properly diagnosing ligament issues. As we stress the ligament, we can visualize its response on stress ultrasound. This allows us to diagnose any instability that might be causing the outside ankle pain. Watch Dr. Centeno’s video below to see how this works.

As you can see in the video, when a loose ligament is stressed, we can see it give way and stretch beyond its normal limits; this is ankle instability. If it doesn’t stretch under the stress, ankle instability can be ruled out. These same loose ligaments would likely not be picked up by an MRI, and the diagnosis for the outside ankle pain would be missed.

A Patient’s Outside Ankle Pain Due to Loose Ligaments

We often see patients with outside ankle pain who have no idea how it happened; they just know their ankle suddenly started hurting. One patient was a classic example of this. As an athletic hockey and Lacrosse player, however, it’s highly possible he experienced sprains and other ankle injuries, even minor ones, over the years, and these, rather than one big traumatic episode, could have been the catalyst to his sudden outside ankle pain.

Dr. Centeno used stress ultrasound imaging to examine this patient’s ankle (see the video above). The stress ultrasound revealed that it was indeed this patient’s ligaments that were causing his outside ankle pain. In fact, he had five damaged ligaments! Not only were they loose; they also had many partial tears. The ligament damage had, over time, created instability between the two lower-leg bones—the fibula and tibia—due to the ankle joint lacking control and stability and, in short, just moving way too much. This, of course, stressed all the ankle structures, creating abnormal motion, and causing outside ankle pain.

If this patient had gone to the average family doctor, podiatrist, or even an orthopedic surgeon, this diagnosis would more than likely have been missed as an MRI would have been the standard diagnostic tool for his ankle pain, not a stress ultrasound, and as we mentioned above, an MRI would not have found these issues.

Treating Outside Ankle Pain Without Surgery

If a family physician or orthopedic surgeon had discovered this particular patient’s loose and torn ligaments, surgery would have likely been the solution; however, surgery should only be a last resort for the most extreme ligament issues. Why? Research suggests that ligament surgery is unable to restore normal motion in the foot and ankle and foot, meaning the ankle never really works like it did before the damage occurred. The abnormal biomechanics created in the ankle by the surgery can cause even more problems as other parts of the leg try to compensate for the improper motion.

Outside ankle pain can be treated without surgery by an interventional orthopedics physician. Loose or torn ligaments usually can be treated nonsurgically with ultrasound-guided high-dose platelet-rich plasma (PRP) injections (typically one to three treatments).

While loose or torn ligaments is a common issue causing outside ankle pain, keep in mind that the pain could also stem from a tendon or nerve problem. The key is to work with your interventional orthopedics physician so he or she can use the proper tools to help diagnose the root cause of your pain. Ligaments, nerves, or tendons, there is likely a nonsurgical regenerative medicine solution for your outside ankle pain.