With carpal tunnel syndrome, oftentimes, when conservative treatments fail to or stop providing relief, patients turn to surgery as what they believe to be their last resort. However, if you search outside of the world of surgical orthopedics and inside the world of interventional orthopedics, you will find that there are nonsurgical options for treating carpal tunnel syndrome.

What Is Carpal Tunnel Syndrome?

The carpal tunnel is a tunnel-like structure in the wrist that the median nerve travels through. There are also carpal ligaments that form the roof of the tunnel and flexor tendons that also run through the tunnel. The median nerve is a branch that generates off the brachial plexus from the cervical spine in the neck. It stretches down through the arm, the wrist, and all the way into the thumb. The flexor tendons provide stability and help bend the thumb and fingers.

When something causes the tunnel to narrow or the medial nerve somehow becomes compressed in the wrist, this can lead to carpal tunnel syndrome (CTS). CTS can be very uncomfortable, and the symptoms are pretty telling, including tingling, burning, or numbness in the thumb; muscle weakness in the fleshy area at the base of the thumb; pain or discomfort with movement; shooting pain up the arm; and even trouble sleeping due to the symptoms listed.

Your doctor will probably first recommend conservative treatments—bracing, changing repetitive positioning, physical therapy, and so on. For pain and swelling, he or she may also recommend nonsteroidal anti-inflammatory drugs (NSAIDs), such as ibuprofen or naproxen, though there are dangerous side effects to NSAIDs, such as the risk of heart attack or stroke, GI bleeds, kidney damage, and much more, so it’s best to steer clear of these drugs. Next, your doctor may try steroid injections, which, again, carry many dangerous side effects, such as breaking down cartilage, damaging tendon cells, killing stem cells, and much more.

CTS tends to get worse over time, not better, however, so with traditional orthopedics, the last resort offered will be surgery.

Surgery for CTS is called a carpal tunnel release, but in order to release the compressed structures, the surgeon cuts through that ligament that makes up the roof of the carpal tunnel to create more room in the tunnel for the nerve and tendons. So what’s wrong with cutting the ligament?

The ligament is there for a reason, and that is to stabilize the tiny carpal bones in the wrist and to anchor the hand muscles. With that carpal ligament transected, this creates wrist instability and weakness, leaving the wrist vulnerable to arthritis and other wrist and hand problems in the future. We’ve even seen patients with severe postoperative complications following a carpal tunnel release, such as compartment syndrome (while more rare, it is something to be aware of).

Nerve hydrodissection with platelet lysate for carpal tunnel syndrome doesn’t involve cutting the ligament, nor does it involve an open and invasive surgery. Take a look at the video below as Dr. Centeno performs this procedure using ultra high resolution ultrasound and the tiniest needle made in the U.S. 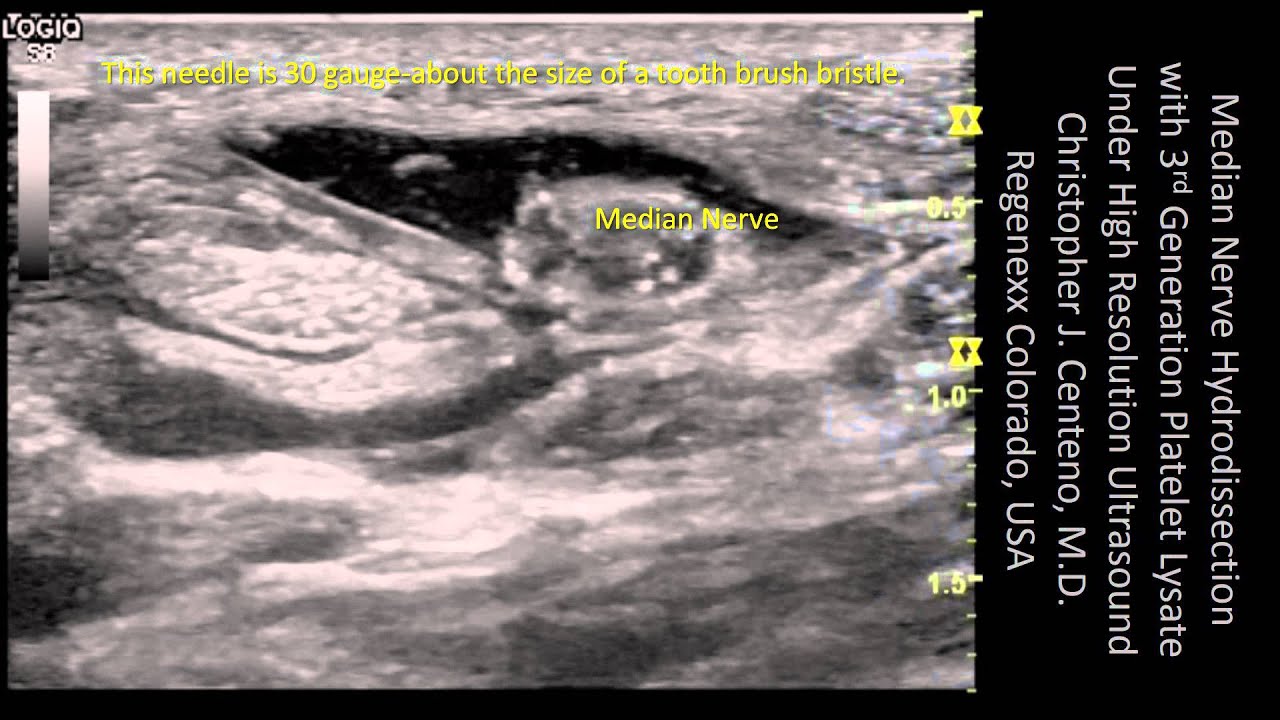 The platelet lysate contains growth factors concentrated from the patient’s own platelets, and it’s precisely injected around the nerve. In our experience, this frees up the compressed nerve, reduces the inflammation, and improves blood flow to the area—all without harming the delicate biomechanics of the wrist, which is inevitable with carpal tunnel release surgery.  In interventional orthopedics, we also will look for the root cause of the problem. What caused the carpal tunnel syndrome to begin with? This may mean tracing that median nerve branch all the way back to an irritated or pinched nerve in the neck and treating that as well.

Carpal tunnel release is an invasive surgery with many consequences. The interventional orthopedics approach to treating the carpal tunnel releases the compressed carpal tissue via a tiny injection that doesn’t included cutting the ligament. And it doesn’t stop there as the primary goal is to figure out what caused the problem in the first place.