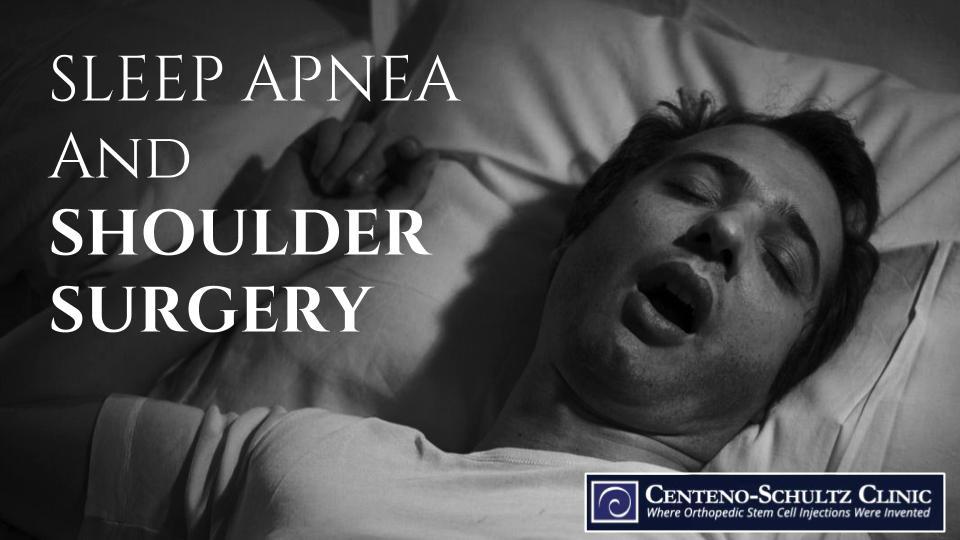 Many Americans suffer from sleep apnea (SA), so many (estimates range between 18 million and 25 million), in fact, it’s become quite an epidemic. Snoring is an indicator of sleep apnea, and while many who snore might not be too concerned about it, the truth is, there are many reasons to be concerned, and it’s not just because snorers wake their loved ones up at night. SA has been linked to increased risks for many adverse health conditions, such as asthma, metabolic disorders, pregnancy complications, heart attack, stroke, and even cancers. Now, a new study suggests we can also add complications following shoulder arthroscopy to the list of sleep apnea risks. We’ll review the study in a moment, but, first, let’s learn more about sleep apnea and shoulder arthroscopy.

Sleep apnea, as the name implies, occurs while you sleep; it is a disruption in breathing (respiration). If you snore, you have some form of obstructive sleep apnea, which is the most common type. It occurs when the throat muscles over-relax, causing them to block the airway. There is another type known as central sleep apnea, which is not associated with snoring. It is rarer and more severe as respiration actually stops because the brain, for whatever reason, becomes unable to communicate with our breathing muscles. Today, we’re focusing on the more common obstructive sleep apnea and snoring.

Many conditions and disorders can indirectly result from sleep apnea. For example, insomnia can occur due to sleep apnea, and insomnia is associated with chronic muscle pain. Taking this a step further, for those who may also struggle with fibromyalgia (widespread pain disorder), which is associated with trouble sleeping, one study found that finding ways to improve sleep may relieve some fibromyalgia symptoms; addressing SA may be a big step to accomplishing this.

Increases in the levels of Leptin, an appetite-controlling hormone, have also been linked to sleep apnea. One problem with too much Leptin is that it is a hormone associated with inflammation and knee arthritis. We also know that obstructive sleep apnea and snoring may decrease bone marrow stem cells. This may occur as the bone marrow releases more stem cells to address the chronic body inflammation due to sleep apnea.

Shoulder arthroscopy is an approach that is used for many different types of shoulder surgeries, including rotator cuff tears, labrum tears, and shoulder impingement. Literally translated, an arthroscope is a small camera instrument (-scope) used to visualize a joint (arthro). Arthroscopy surgery, in general, is touted as a less invasive option to open surgery.

In shoulder arthroscopy, an incision is made down to the shoulder joint, large enough to pass the scope through. Additional incisions, called portals, are also tunneled through skin and tissue down to the level of the joint, and these portals allow the passage of additional instruments that will be used during shoulder surgery. Instrumentation passed depends on what surgery is being accomplished, whether it’s an excision, replacement, repair, or so on. Despite the less-invasive plug, arthroscopies (shoulder arthroscopy, knee arthroscopy, hip arthroscopy, etc.) come with many associated problems of their own.

So are the risks worth it? Are patients at least finding that their shoulder arthroscopy worked? Not really. Let’s review some results:

Bottom line, if you snore, you have some degree of SA, and it’s a good idea to address it sooner rather than later. Why? The longer you wait, the more likely it is that you will also be dealing with resulting health conditions associated with sleep apnea. In addition, if you snore and struggle with SA, this is even more reason to seek nonsurgical interventional orthopedics solutions to addressing your shoulder condition as surgery, even arthroscopic surgery, may set you up for potential complications.