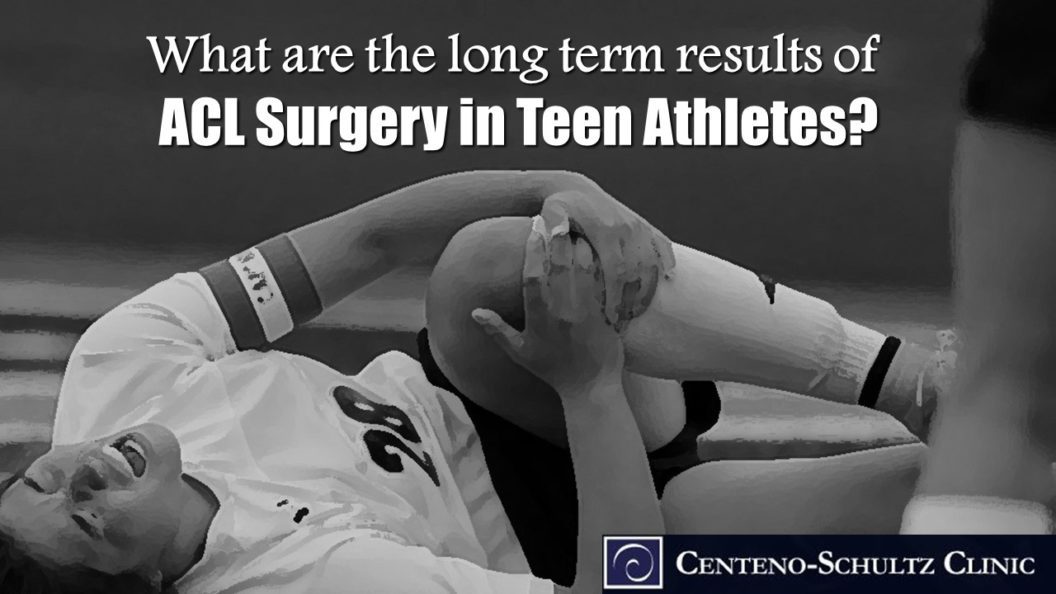 There’s been a trend in our young athletes with ACL injuries over the last decade-plus: Teen ACL knee surgery. The push, by orthopedic surgeons and parents alike, seems to be, if our pro athletes are doing it, why not our kids? Won’t it get them back in the game faster and retain their performance levels? The answer to these questions is, not necessarily; in fact, research suggests that ACL knee surgery side effects may actually be worse in kids, with slow recovery times, poorer performance after surgery, and early-onset arthritis, as early as their 20s.

ACL injuries, in most cases, can be treated without major surgery and the risks and long recovery times that follow. We’ll explain more in a moment, but, first, let’s review ACL and ACL surgery.

The anterior cruciate ligament (ACL) is a stabilizing ligament in the knee. Rapid movements, such as those that occur in sports motions can stress the ligament beyond its limits and sprain or even tear the ACL, a very common sports injury. Surgery involves cutting out the torn ACL and reconstructing a ligament in its place using a weaker tendon, typically harvested from the patient’s hamstrings or quadriceps. Harvesting these tendons also weakens the muscles in those areas (those tendons are there for a reason). There are many other problems with ACL reconstruction, such as inappropriate insertion angles, inability to reconnect to nerves, and one-bundle reconstruction rather than the native two, which you can read about at this link.

Learn more about the ACL and ACL surgery in the video below:

As a parent who has to make medical decisions for your kids, it can be challenging. When your teenager suffers an ACL tear playing a sport he or she loves, it can be concerning, to say the least, to see your active kid suddenly mostly couch-bound or hobbling about in pain. But the decisions you make now can determine whether or not that teen also ends up hobbling around in his or her 20s or 30s with early arthritis. Sure, they might seem to mostly recover from ACL surgery now, but it’s very likely that activities ten or fifteen years from now will be much more difficult for them.

One study followed kids aged 12–16 with complete ACL tears who’d had ACL surgery. These kids were followed to the ages of 26–30. The disturbing finding? Within 14 years after surgery (the amount of time they were followed), a stunning two-thirds of the teens who’d had ACL surgery had developed arthritis in the operated knee! For comparison, the opposite, non-operated knee was also followed, and only 14% had developed arthritis in that knee. So in the majority of the teens, the ACL surgery was attributed to early knee arthritis.

So it seems that ACL surgery in teens, which is promoted as necessary to “fix” and stabilize the knee as well as prevent future arthritis, is actually destabilizing the knee and instigating early arthritis. So why are we exposing our young athletes to these big ACL surgeries? We suspect it’s because many parents out there don’t realize there are nonsurgical interventional orthopedic solutions to repairing these teen ACL injuries that not only come with shorter recovery times, but won’t cause knee instability, early-onset arthritis, and more.

A couple of years ago, a 13-year-old boy tore his ACL playing football. He was unable to run, and even walking was painful. His parents, after researching ACL surgery and discovering its many risks, wisely chose against having their son’s ACL cut out and replaced. They found our clinic while seeking nonsurgical solutions, and after examining the young patient, Dr. Pitts determined their son was a good candidate for precise fluoroscopy-guided injections of his own bone marrow stem cells into his ACL.

A few weeks later, this young athlete was back in the game. If he’d had surgery, he would have just been cleared to walk without his crutches and start his rehab, still likely many weeks from returning to play. You can read more on his ACL stem cell treatment story and view his before and after X-ray images at this link.

While we don’t recommend ACL surgery in most cases in our professional athletes either, and we treat many of these players as well, the question we have to ask is, why are we treating our teen athletes like professional adult athletes? These aggressive orthopedic surgeries at one time were only reserved for the worst-case scenarios in our kids, but they’ve become more the norm than the exception today. And teen ACL knee surgery seems to be leading the pack. If your teen has suffered a knee injury while playing sports or has already been diagnosed with an ACL injury, get the advice of an interventional orthopedic physician before you pull the trigger on a teen ACL knee surgery.