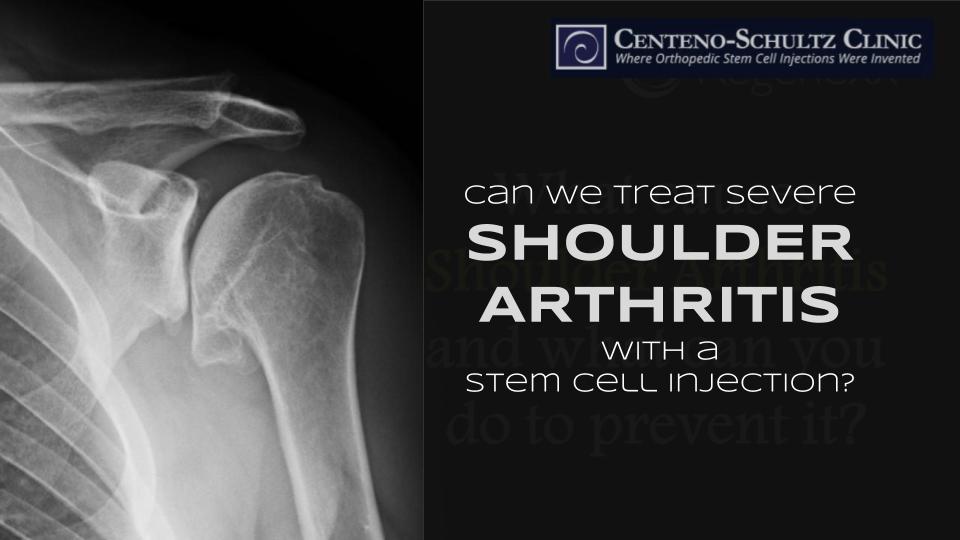 Our bodies shouldn’t be treated like machines in which if a part breaks down, like a shoulder or a knee, for example, we just replace it. Yet this is often the result in the traditional orthopedic-care model. With severe shoulder arthritis, and other musculoskeletal conditions, when conservative treatments are no longer effective and dangerous drugs, like NSAIDs, steroids, or even narcotics, are no longer providing relief, surgery is typically the next step. But is orthopedic surgery the only option for severe shoulder arthritis? Not necessarily. There are interventional orthopedic injection options as well that don’t require surgery.

Let’s first examine why traditional orthopedics believes surgery is the only way for those with severe shoulder arthritis.

Shoulder Pain Not Due to Lost Cartilage or Bone Spurs

Cartilage, the cushioning structure that lives between the bones of joints, is a big focus in arthritis. With arthritis, cartilage breaks down, and we measure severity of arthritis based on the amount of cartilage lost. All the way back to medical school, physicians are taught that the joint pain in arthritis results from the amount of cartilage lost and the formation of bone spurs, both of which can be seen on X-ray or MRI. But is this true? Does lost cartilage equate to arthritis pain? According to the Osteoarthritis Initiative and the Framingham Osteoarthritis Study (studies sponsored by the National Institutes of Health and the largest government-funded studies), there is no correlation between lost cartilage and pain or lost function.

As for the bone spurs that form in shoulder arthritis, we also know these typically don’t cause pain; in fact, they often form in order to protect the unstable joint. Surgeons, unfortunately, like to remove bone spurs from the shoulder, but if instability isn’t also addressed, this will only create more damage to the joint.

If you tear a structure, such as the rotator cuff or meniscus or any tendon or ligament, or if you have developed a hole in your cartilage, the orthopedics surgery model, often being driven by a finding on MRI, focuses on the need to perform surgery to fix the problem. And pain is often automatically associated with findings on MRI when something else may actually be causing the pain. In extreme cases, surgery may be necessary, but the problem today is that surgery has become the focus in orthopedics in less and less extreme cases and even when there are other options.

Examples of this include performing debridements (or cleaning out) an arthritic joint, which has been shown to be no better than a sham surgery. Another common orthopedic surgery that we’ve seen the research discredit is meniscus tear surgery, or meniscectomy, which has also been shown to no better than fake surgery as well as just physical therapy. We also know spinal fusions are often ineffective and can actually cause more damage in the process. We’re not saying orthopedic surgery as a whole is bad news; certainly there are some cases where surgery is valid and the true last resort, but what we are saying is that what we often see on an MRI (e.g., lost cartilage) doesn’t automatically explain a patient’s pain as, in most cases, there are just as many patients with the same MRI results that have no pain. So the goal is to find and treat the true source of the pain.

We’ve seen many patients with severe shoulder arthritis. One patient, for example, had no cartilage, large bone spurs, a lost range of motion in the shoulder, and even shredded rotator cuff tendons. Multiple surgeons had advised him on the need for shoulder replacement. We treated his shoulder with precise image-guided stem cell injections. Even with his multiple and extreme shoulder issues, within five months, he reported not only an improvement of about 50%, but he was also doing push-ups and triceps pulls again, something he’d been unable to do for a while.

So how does this work? He had no cartilage to work with, and, clearly, without removing his bone spurs, the injection wouldn’t be able to improve his range of motion. However, we do know that his MRI was not a reliable indicator of his shoulder pain. So how were we able to improve his shoulder? First, we addressed the toxic chemical environment in his shoulder (shown to improve the shoulder not only in the linked research but also in our own observations for 12+ years now). Second, his mechanical function was improved, likely by mending small tears in his rotator cuff, providing a better tolerance to stress on the shoulder. Since most of his pain was sourced in these areas, his pain decreased while his function increased.

Why Save the Shoulder?

In a case of such severe shoulder arthritis, like above, why save the shoulder? Why not just go ahead and remove it and install a brand-new metal, plastic, or ceramic joint? Shoulder replacement is a highly invasive surgery with major side effects, such as damage to the rotator cuff. The artificial joint never functions biomechanically like the original, and outcomes for shoulder replacement are some of the worst of any joint replacement. While this severe shoulder arthritis patient was able to obtain significant relief with his orthobiologic injections that allowed him to return to his intense upper-body exercises, this would not have been likely with a shoulder replacement.