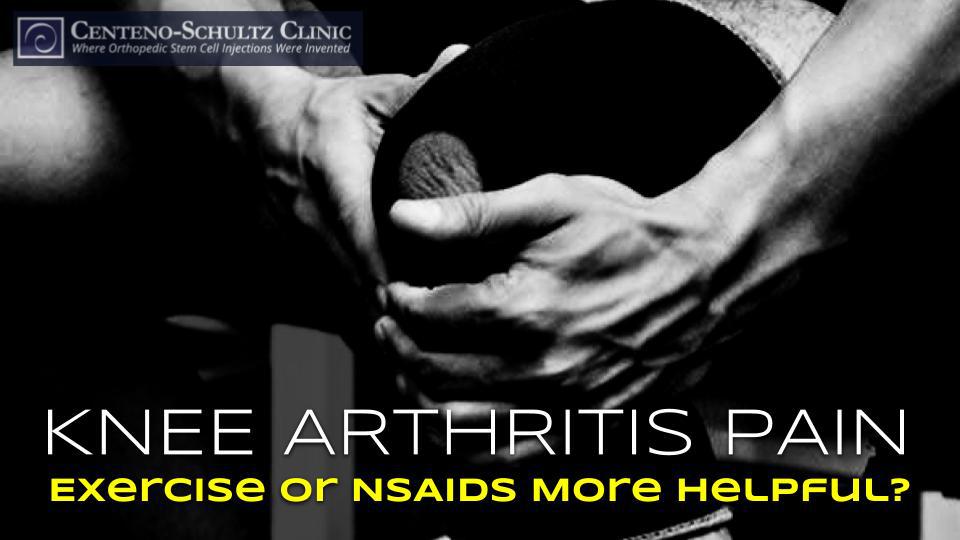 America, as a whole, loves its nonsteroidal anti-inflammatory drugs (NSAIDs). The tiniest ache or pain can send many running to their medicine cabinet for an NSAID to attempt to control that small pain before it gets worse. We see patients not only taking them to relieve pain but to prevent it before it even occurs, such as in long-distance runners and other activities associated with potential pain. The problem with all the NSAID popping is that many don’t realize these are very dangerous drugs.

Perhaps the most common reason people take NSAIDs is due to musculoskeletal pain, such as knee arthritis pain. What if we told you that recent research suggests exercise may be just as effective for that knee arthritis pain as Motrin or Advil…and it doesn’t come with all the dangerous side effects? In fact, this is what one recent study found. Today we’re focusing on exercise versus NSAIDs for knee arthritis pain, the third post in our April exercise series. Let’s review the study.

A recent study investigated the long-term effect on mild to moderate knee arthritis patients who exercised versus those who took NSAIDs, such as Aleve, Celebrex, and so on. Participants with knee arthritis were randomly placed in either an exercise group or a drug group (drugs included NSAIDs [anti-inflammatory and pain reliever] as well as acetaminophen [pain reliever only]). At one year, participants reported their pain, functionality (e.g., mobility, self-care, etc.), and other indicators. The exercise group actually experienced significantly more improvements in their pain and other symptoms as well as functionality.

More on Exercise and Knee Arthritis

A new diagnosis of knee arthritis doesn’t mean all activities should come to a halt. In fact, this is the time to focus on treating and strengthening your knee so it doesn’t quickly worsen.

Knee arthritis affects not only the cartilage but also the bones that form the joint. The cartilage i cushions the bones and absorbs shock, It also has a nice, slick surface texture that allows the bones glide smoothly within the joint. When the cartilage begins to wear down, this is arthritis, and it can happen with wear and tear as we age, with injury, or even due to certain diseases. The cartilage degeneration can create instability, causing bone spurs to develop to attempt to protect the damaged joint. Pain, inflammation, function problems, and other symptoms often are associated with knee arthritis.

So exercise may be more effective at relieving knee arthritis pain than NSAIDs, but no one can contest that popping an NSAID is certainly much easier and less time consuming. So why not the NSAIDs? Of course, exercise is beneficial for so many other reasons, and if you’re sticking with us for our April exercise series, you’ll learn a lot more on this, but NSAIDs are just dangerous drugs…

Popping an NSAID Is Easy but It’s Dangerous

Many studies have revealed many dangerous side effects of NSAIDs, and the list continues to grow as more and more studies are published. Here are just a handful of issues associated with NSAIDs:

There ways to end your relationship with NSAIDs if you have knee arthritis. Starting an exercise program that focuses on strengthening your knee is important. If you find that cutting the NSAIDs results in too much pain, there are alternatives. High-quality supplements such as glucosamine and curcumin may reduce your inflammation, ease your knee arthritis pain, and even protect your cartilage. So ditch the NSAIDs and switch to exercise!