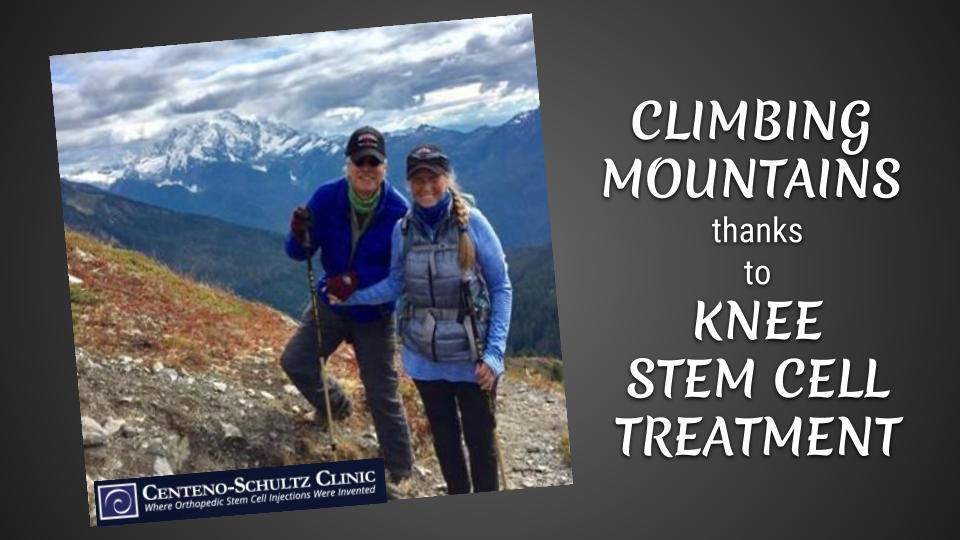 One of our favorite things at the Centeno-Schultz Clinic is getting feedback from patients who have reclaimed their active lifestyles after treatments. While we utilize a registry for ongoing follow-up and to keep track of patient outcomes, there’s nothing quite like getting an amazing picture of or letter from a patient who is skiing, training for fitness competitions, climbing to a mountaintop, racing cars, or simply just living a normal life again. Today, we are featuring Dion, a patient who, on her one-year anniversary following a knee stem cell treatment, sent us a picture from a mountain at 6,150 feet to update us on her progress.

The Knee Is Connected to the Spine?

In order to understand Dion’s story, it’s important to understand that despite appearances, the knee really is connected to the spine. The nerve supply to the knee originates from a nerve branch that’s rooted in the lumbar spine; without this critical neurological connection to the spine, the knee would be unable to function, and the leg muscles would atrophy, or shrink, and be unable to support the knee. This means that when a nerve that feeds the knee or any other part of the lower limb becomes irritated at the spinal level, it can affect any of the structures anywhere along the nerve branch. In fact, there may be no back pain at all; however, an irritated nerve in the spine may present as knee pain and dysfunction.

Patient’s Knee and Back Problems

Dion, on the other hand, did have low-back issues that had been ongoing when she presented to us with her knee issues, so Dr. Pitts and Dr. Williams knew right away that they were likely dealing with a low-back issue as the potential source for her knee problem. In addition to the spine issue, a thorough exam also revealed not only a loss of some of her knee cartilage but also degenerated tendons (patellar and hamstrings), lax ligaments, and degeneration of her posterior meniscus.

While many other clinics would have performed a quickie exam and simply injected stem cells into the knee joint itself and called it done, our comprehensive exam revealed that Dion’s knee required a much more involved treatment to thoroughly address not only her knee but also her back issues.

We treated all of Dion’s damaged structures. Many sites were treated with advanced and precise image-guided (ultrasound and fluoroscopy) injections of high doses of Dion’s own concentrated bone marrow stem cells. In addition platelet lysate, using her own platelets, was injected around her irritated back nerves in multiple locations.

Dion underwent her spine treatment and knee stem cell treatment in early October of 2016. You can read Dion’s update on her year following her treatments in her own words at this link, but as an abbreviated summary, Dion participated in a five-mile March in Seattle; hiked the Oyster Dome, Snowbird, Bryce, Snow Canyon, Mt. Baker, Yellow Aster Butte, the Grand Canyon, and much, much more; spent three months (March–May) packing, lifting, and moving a home and office; and so on.

There’s just nothing quite as rewarding as getting these stories from our patients we’ve cared for who have reclaimed the lives they love.  So keep the stories coming…we love seeing you climbing those mountains or skiing those slopes or running those marathons or even just keeping up with those grandkids again.