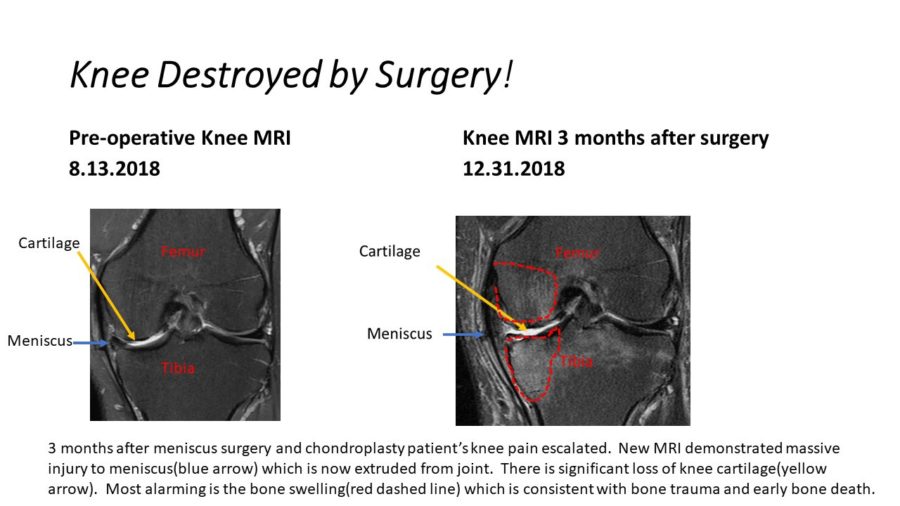 At the Centeno-Schultz Clinic, we witness the destructive and oftentimes permanent affects of orthopedic surgery on patients. It can result in a deterioration of their function, an escalation in time, and, equally important, an erosion of their hopes and dreams. Knee meniscectomy is one such surgery…

Meniscectomy is a common orthopedic procedure for patients with a meniscus injury. The meniscus is a crescent-shaped fibrocartilage structure between the femur (thigh bone) and tibia (shin bone) that disperses the forces placed on the knee joint. It is an important shock absorber that prevents damage to the adjacent articular cartilage.

Meniscectomy is the repair and more often than not the removal of a portion of the meniscus. To better understand meniscectomy, please watch the video below:

Meet MC, who is a 57-year-old avid recreational skier, cyclist, and hiker, who presented to the Centeno-Schultz Clinic with a four-year history of left knee pain that was constant in duration over the last two years, localized on the medial aspect of the knee, and aggravated by twisting, bending, and walking. MC had previously undergone three meniscectomies: 2004, 2017, and September of 2018. The most recent, September 2018, surgery made his knee worse. The MRI comparison below tells the story.

The MRI on the left is prior to the September 2018 meniscectomy; whereas, the MRI on the right is three months post meniscectomy. The meniscus identified by the blue arrow is significantly smaller and pushed out (extruded) from the joint after surgery. With no shock absorber, the articular cartilage identified by the yellow arrow has significantly been eroded three months after surgery. The femur and tibia bones are swollen as a result of no shock absorber and severely eroded cartilage, which is outlined in the red dashed line.

Surgery has not served MC well and, in fact, has severely compromised his knee and level of function. Equally important is the psychological  and emotional impact of being permanently limited. Later this month, MC will undergo Regenexx SD in an effort to stabilize the knee and increase function.

If you have a meniscus tear, know that surgery is not the answer and may, in fact, make your knee worse. The high-level studies are clear that knee meniscectomy is no better than placebo. Arrange for a consultation at the Centeno-Schultz Clinic, where you will have an evaluation by a board-certified, fellowship-trained physician who will review your history and radiographic studies and provide nonsurgical treatments.

Anything less will compromise your outcome and future potential.